The Oxford Handbook of Religion, Conflict, and Peacebuilding 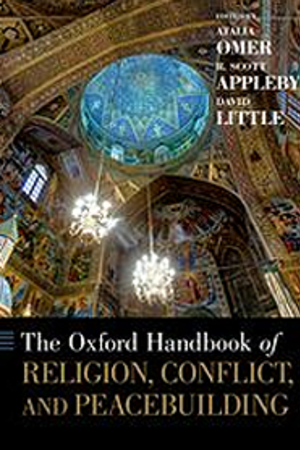 This book provides a comprehensive and interdisciplinary account of the scholarship on religion, conflict, and peacebuilding.

Extending the scope of inquiry beyond previous parameters, the volume engages deeply with the legacies of colonialism, missionary activism, secularism, orientalism, and liberalism as they relate to the discussion of religion, violence, and nonviolent transformation and resistance.

Featuring diverse case studies from various contexts and traditions, the volume is organized thematically into five different parts. It begins with an up-to-date mapping of scholarship on religion and violence, and religion and peace.

The second part explores the challenges related to developing secularist theories on peace and nationalism. In addition, this section broadens the discussion of violence to include an analysis of cultural and structural forms, thereby expanding the scope of potential scholarship pertinent to the analysis of religion.

The third part engages with the controversies within religion and development, religious-violent and nonviolent-militancy, religion and the legitimate use of force, the protection of the freedom of religion as a keystone of peacebuilding, and theories about gender and peacebuilding.

The fourth part highlights peacebuilding in practice by focusing on constructive resources within various traditions, the transformative role of rituals, spiritual practices involved in the formation of peace-builders in contexts of acute violence, youth and interfaith activism in American university campuses, religion and solidarity activism, scriptural reasoning as a peacebuilding practice, and an extended reflection on the history and legacy of missionary peacebuilding.

The conclusion looks to the future of peacebuilding scholarship and the possibilities for new growth and progress. Bringing together a diverse array of scholars, this handbook grapples with the tension between theory and practice, cultural theory, and the legacy of the liberal peace paradigm, offering provocative, elastic, and context-specific insights for strategic peacebuilding processes.

Kroc contributors in the book include: