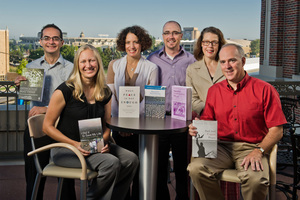 Books, we still love books. In recognition of this time-honored means of disseminating scholarship and contributing to new knowledge worldwide, we re-introduce six books written or edited by Kroc Institute faculty and published in 2012-13.

Co-edited by Ernesto Verdeja, assistant professor of political science and peace studies, this book is an interdisciplinary overview of recent scholarship in genocide studies. It examines current research on genocide; new thinking on categories and methods of mass violence; developments in teaching; and critical analysis of military humanitarian interventions and post-violence justice and reconciliation. “The burgeoning field of genocide studies brings together disciplines in the social sciences and humanities,” wrote William Schabas, professor of international law at Middlesex University, UK, “united in their fascination with the causes and consequences of mass atrocity and in their determination to put it to an end. Leading thinkers in the field wrestle with the contemporary debates about prevention and intervention in this useful, compact volume edited by two of the field’s eminent scholars.”

I Did It to Save My Life: Love and Survival in Sierra Leone (University of California Press)

This book by Catherine Bolten, assistant professor of anthropology and peace studies, is based on 18 months of research in Makeni, Sierra Leone, and interviews with hundreds of people. It presents the narratives of 7 ordinary people — soldier, rebel, student, teacher, evangelist, father, and politician — who explain their actions and moral choices during a devastating civil war. “Ethnographically rich, these accounts come to life in beautiful prose,” wrote anthropologist Catherine Besteman. “These are inspiring and at times heartbreaking stories . . . This will be a valuable contribution as well as a welcome counter to the more popular images of war zones as places of total immorality.”

When Peace Is Not Enough: How the Israeli Peace Camp Thinks about Religion, Nationalism, and Peace (University of Chicago Press)

This book by Atalia Omer, assistant professor of religion, conflict and peace studies, focuses on the perceptions and histories of Israel’s most marginalized stakeholders — Palestinian Israelis, Arab Jews, and non-Israeli Jews — and their role in the Israeli peace movement, born at the onset of peace talks between Israel and Egypt in 1977. “Ranging widely over political theory, cultural studies, history, and religious studies — and with an impressive command of comparative politics across the globe — When Peace Is Not Enough is a stunning and accomplished work and an intellectually and politically courageous one,” wrote Robert Orsi, editor of the Cambridge Companion to Religious Studies.

What Is War? An Investigation in the Wake of 9/11 (Martinus Nijhoff Publishers)

This volume, edited by Mary Ellen O’Connell, professor of law and research professor of dispute resolution, makes concrete the fact that armed conflict is legally defined as “war” only when there is actual fighting by organized groups at a certain level of intensity on the battlefield. Without this clear definition, governments can simply claim they are at war in order to justify killings, arrests, detentions or other actions that otherwise would be prohibited by international law. What Is War? includes the formal report of the committee, chaired by O’Connell and with a mandate to report on the definition of war in international law, produced for the biennial meeting of the International Law Association in The Hague, where it was approved.

This book by Daniel Philpott, associate professor of political science and peace studies, draws on two decades of field research in Bosnia, central Africa, and Kashmir to make the case for forgiveness and reconciliation as a way to achieve justice and peace after violence conflict. This is the second volume in the Oxford University Press “Studies in Strategic Peacebuilding” series, edited by R. Scott Appleby, John Paul Lederach, and Philpott. “Daniel Philpott is quite simply the best at what he does, namely bringing normative commitments to bear at the most vital issues of our day where religion and public life, both domestic and international, are concerned,” wrote the late Jean Bethke Elshtain, the Rockefeller Professor of Social and Political Ethics at the University of Chicago Divinity School.