When Peace Is Not Enough: How the Israeli Peace Camp Thinks about Religion, Nationalism, and Justice 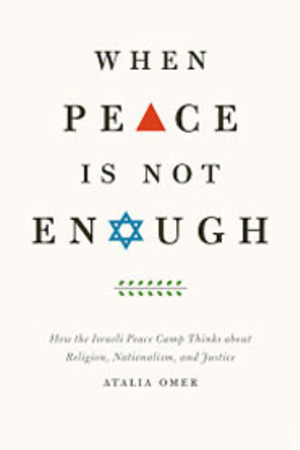 The state of Israel is often spoken of as a haven for the Jewish people, a place rooted in the story of a nation dispersed, wandering the earth in search of their homeland.

Born in adversity but purportedly nurtured by liberal ideals, Israel has never known peace, experiencing instead a state of constant war that has divided its population along the stark and seemingly unbreachable lines of dissent around the relationship between unrestricted citizenship and Jewish identity.

By focusing on the perceptions and histories of Israel’s most marginalized stakeholders—Palestinian Israelis, Arab Jews, and non-Israeli Jews—Atalia Omer cuts to the heart of the Israeli-Arab conflict, demonstrating how these voices provide urgently needed resources for conflict analysis and peacebuilding.

Navigating a complex set of arguments about ethnicity, boundaries, and peace, and offering a different approach to the renegotiation and reimagination of national identity and citizenship, Omer pushes the conversation beyond the bounds of the single narrative and toward a new and dynamic concept of justice—one that offers the prospect of building a lasting peace.

Conclusion: The Hermeneutics of Citizenship: The Missing Dimension of Peacebuilding

“Timely and inspirational, When Peace Is Not Enough challenges the conventional wisdom on the Israeli-Palestinian conflict—and on the so-called peace process. Atalia Omer’s fresh and original perspectives about the relationship between liberalism, peace, and war deserve to be read by everyone interested in the theoretical richness of the concept of liberal-nationalism.”
— Yehouda Shenhav, author of The Arab Jews: Nationalism, Religion and Ethnicity

“When Peace Is Not Enough is a groundbreaking contribution to the literatures on comparative nationalisms and political theory, as well as to religion, culture and peace building. Drawing on Hebrew, English, German and Arabic sources, as well as insights culled from cultural anthropology, critical theory, political sociology and religious studies, Atalia Omer brings a new level of interdisciplinary prowess, theoretical sophistication, and explanatory power to the study of religion, nationalism and politics.”
— R. Scott Appleby, author of The Ambivalence of the Sacred: Religion, Violence, and Reconciliation