Toward a Generous Orthodoxy: Prospects for Hans Frei's Postliberal Theology 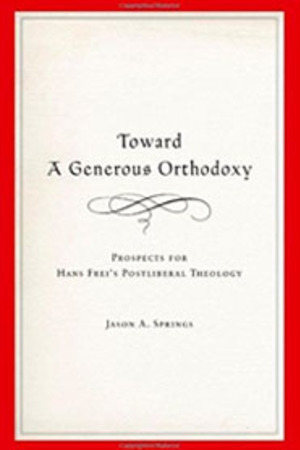 Hans Frei, one of the most influential American theologians of the 20th century, is considered a founder of postliberal theology. Frei never set forth his thinking systematically, and he has been criticized for being inconsistent, contradictory, and insufficiently rigorous. This book offers a reevaluation of Frei's work.

Jason Springs argues that Hans Frei's theology cannot be understood without a meticulous consideration of the complex equilibrium of his theological and philosophical interests and influences. Moreover, by placing Frei's work in critical conversation with developments in pragmatist thought and cultural theory since his death, this re-reading aims to resolve many of the misunderstandings that vex Frei’s theological legacy. What emerges is a sharpened account of the Christologically anchored, interdisciplinary, and conversational character of Frei's theology, one he came to describe as a "generous orthodoxy" — modeling a way for academic theological voices to take seriously both their vocation to the Christian church and their roles as interlocutors in academic discourse.

Jason Springs's Toward a Generous Orthodoxy is quite simply the best available account of Hans Frei's work. But this book is more than just an account of Frei; it makes a constructive contribution to theology that is truly remarkable. I am particularly struck by his observation that Wittgenstein helps us to see why we should never abandon the presumption that theological language helps us understand the way things are. This is really a terrific book."
— Stanley Hauerwas, Gilbert T. Rowe Professor of Theological Ethics, Duke University

"Hans Frei's hard sayings about the Bible, theology, and the church won him a major following. His critics reject those sayings as obviously false. Jason Springs has done something quite different and original. He has recast Frei's central claims in way that frees them from paradox. This book will require theologians to rethink the options they have been debating for the last thirty years."
— Jeffrey Stout, author of Blessed Are the Organized: Grassroots Democracy in America.

"In this book Jason Springs makes an impressive case for Hans Frei's approach to theology. By devoting careful attention to his engagement with Wittgenstein, Ryle, Auerbach, and Geertz, Springs adds greatly to our understanding of Frei, who cannot be understood apart from this context. At the same time, he has important suggestions to make about how theology relates to religious studies. Central to his argument is the claim that Frei exemplified a complex equilibrium of interests, thus indicating what a 'generous orthodoxy' might bring to the academic study of religion. At a time of growing polarization between 'theology' and 'religious studies,' this is a timely intervention."
— George Hunsinger, Hazel Thompson McCord Professor of Systematic Theology, Princeton Theological Seminary