Strategies of Peace: Transforming Conflict in a Violent World 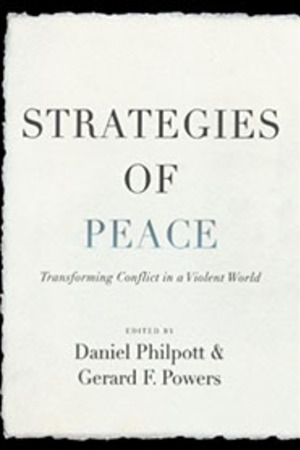 How can a just peace be built in sites of genocide, massive civil war, dictatorship, terrorism, and poverty? In Strategies of Peace, the first volume in the Studies in Strategic Peacebuilding series, 15 leading scholars propose an imaginative and provocative approach to peacebuilding.

Today the dominant thinking is the "liberal peace," which stresses cease fires, elections, and short run peace operations carried out by international institutions, western states, and local political elites. But the liberal peace is not enough, the authors argue. A just and sustainable peace requires a far more holistic vision that links together activities, actors, and institutions at all levels.

By exploring innovative models for building lasting peace — a United Nations counter-terrorism policy that also promotes good governance; coordination of the international prosecution of war criminals with local efforts to settle civil wars; increasing the involvement of religious leaders, who have a unique ability to elicit peace settlements; and many others — the authors advance a bold new vision for peacebuilding.

"Since the end of the Cold War, the United States and the international community have been confronted by countless conflicts — civil, ethnic, religious, separatist, and others — for which our existing tool-kit was inadequate. As the distinguished authors in Strategies of Peace make clear, peacebuilding today requires comprehensive, far-sighted, and sustainable policies that respond to the defining characteristics of the early 21st century: interdependence, dynamism, and complexity. This remarkable and fascinating volume is essential reading for students, scholars, and practitioners."
— Lee H. Hamilton, President and Director, Woodrow Wilson International Center for Scholars