Serious Youth in Sierra Leone: An Ethnography of Performance and Global Connection 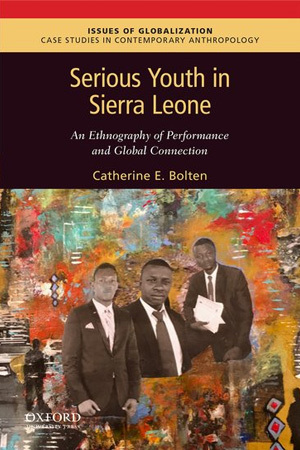 In Catherine Bolten’s recently published book, "Serious Youth in Sierra Leone," she presents findings on generational preconceptions and their impact on young men in Makeni, Sierra Leone. Her research has implications for everything from development to post-conflict reconstruction to how millennials are perceived and engaged around the world.

Generational anxieties over what will happen to the young are unfolding starkly in Sierra Leone, where the civil war that raged between 1991 and 2002--characterized by the extreme youthfulness of the rebel movement--triggered mass fear of that generation being "lost." Even now, fifteen years later, "children of the war" are regarded with suspicion. These fears stem largely from young people's easy embrace of globalization, enabled by the flood of international humanitarian aid following the war. Sierra Leone's increasingly global connectivity has triggered a cultural arms race between adults and their children, with adults often controlling, manipulating, and quashing the ambitions of the young.

Through an investigation of the lives and struggles of Sierra Leonean youth in the northern capital town of Makeni, Serious Youth in Sierra Leone: An Ethnography of Performance and Global Connection turns these fears on their head. Author Catherine Bolten argues that urban youth in Makeni are largely a conservative social force, rather than rebellious or revolutionary--the young want to have steady incomes, start families, and be respected. Adults misrecognize their children's conservative values and desires as radical because they interpret global engagement as a desire for social upheaval, rather than as a way to be noticed and taken seriously. Bolten articulates the social processes that lead to children--the future of a society--becoming a representation of a society's deepest anxieties about the destruction of its values and ideologies, and why those might be falsely construed.