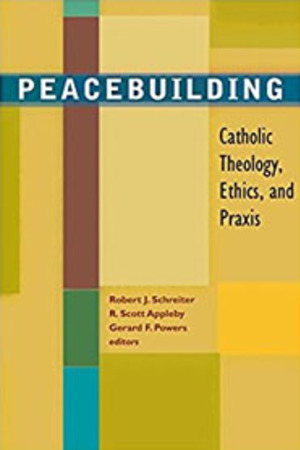 Peacebuilding refers to a range of topics, ranging from conflict prevention to post-conflict reconciliation. In this volume a strong cast of Catholic theologians, ethicists, and scholar-practitioners join to examine the challenge of peacebuilding in theory and practice.

While many of the essays deal with general themes of reconciliation, forgiveness, interreligious dialogue, and human rights, there are also case studies of peacebuilding in such diverse contexts as Colombia, the Philippines, the Great Lakes region of Africa, Indonesia, and South Africa.

This volume will be of interest to all scholars engaged in developing a theology and ethic of just peace, as well as students seeking to understand the interaction between theology, ethics, and lived Christianity.

"This is a uniquely powerful and important book. Its relevance begins with the Catholic community but it reaches beyond the church to other religious traditions to the role of states and international institutions and — most powerfully — to the lives of those seeking to build the structures of peace in conflicted communities throughout the world."
— J. Bryan Hehir, John F. Kennedy School of Government, Harvard University

Gerard F. Powers is Director of Catholic Peacebuilding Studies at the Kroc Institute. For 17 years, he was a senior advisor in the Office of International Justice and Peace of the U.S. Conference of Catholic Bishops, the last
six as director.