Pakistan and the Bomb: Public Opinion and Nuclear Options 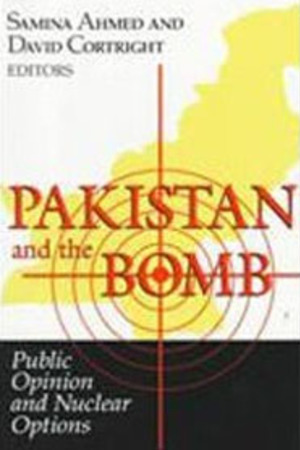 In the wake of the May 1998 nuclear weapons tests conducted in South Asia, Pakistan wrestles with its national nuclear policy. Pakistan and the Bomb captures the nation’s attitudes towards these tests by introducing the results of an in-depth public opinion survey conducted in the months leading up to this historical event.

This timely and thorough volume uses the comprehensive study to examine the factors that brought nuclear arms to South Asia. This research reveals that a majority of Pakistani elite favor an open national policy on nuclear weapons instead of total renunciation or weaponization. Editors Samina Ahmed and David Cortright cite the fear of nuclear threat from India as the principal factor underlying Pakistani support for the nuclear opinion.

In addition to explaining how Pakistan reached its current state of nuclear competition with India, Pakistan and the Bomb explores the conditions that may persuade Pakistani elites to change their opinion on nuclear weaponization. Improved relations with India and a renunciation of the Indian nuclear program as well as settlement of the Kashmir dispute would persuade Pakistanis to forgo the nuclear option.

Pakistan and the Bomb democratizes the debate over nuclear weapons in South Asia by highlighting a new generation of young Pakistani authors. The volume explains the nation’s journey to nuclear weapons capability from several perspectives, including the experience of three wars with India that culminate in Pakistan’s dismemberment in 1971, the decision to build the bomb, the history of its development, the desire to overcome social and economic backwardness and the inconsistent and often troubled relationship with the United States. By providing the background for the nation’s decision to develop a nuclear weapons capability, Pakistan and the Bomb offers a new vision for evaluating the nuclear standoff in South Asia and identifies the steps that can lead to a secure, weapons-free future.