Days of Awe: Reimagining Jewishness in Solidarity with Palestinians 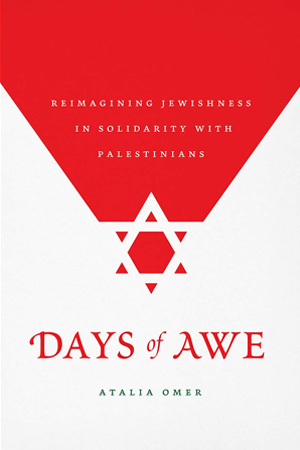 For many Jewish people in the mid-twentieth century, Zionism was an unquestionable tenet of what it meant to be Jewish. Seventy years later, a growing number of American Jews are instead expressing solidarity with Palestinians, questioning old allegiances to Israel. How did that transformation come about? What does it mean for the future of Judaism?

In Days of Awe, Atalia Omer examines this shift through interviews with a new generation of Jewish activists, rigorous data analysis, and fieldwork within a progressive synagogue community. She highlights people politically inspired by social justice campaigns including the Black Lives Matter movement and protests against anti-immigration policies. These activists, she shows, discover that their ethical outrage at US policies extends to Israel’s treatment of Palestinians. For these American Jews, the Jewish history of dispossession and diaspora compels a search for solidarity with liberation movements. This shift produces innovations within Jewish tradition, including multi-racial and intersectional conceptions of Jewishness and movements to reclaim prophetic Judaism. Charting the rise of such religious innovation, Omer points toward the possible futures of post-Zionist Judaism.