What Is a Madrasa? 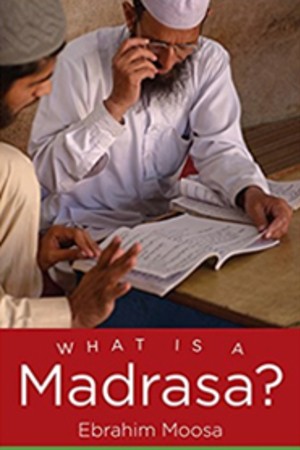 Taking readers inside the world of the madrasa—the most common type of school for religious instruction in the Islamic world—Ebrahim Moosa provides a valuable resource for anyone seeking to understand orthodox Islam in global affairs.

Focusing on postsecondary-level religious institutions in the Indo-Pakistan heartlands, Moosa explains how a madrasa can simultaneously be a place of learning revered by many and an institution feared by many others, especially in a post-9/11 world.

Drawing on his own years as a madrasa student in India, Moosa describes in fascinating detail the daily routine for teachers and students today. He shows how classical theological, legal, and Qur'anic texts are taught, and he illuminates the history of ideas and politics behind the madrasa system.

Addressing the contemporary political scene in a clear-eyed manner, Moosa introduces readers to madrasa leaders who hold diverse and conflicting perspectives on the place of religion in society. Some admit that they face intractable problems and challenges, including militancy; others, Moosa says, hide their heads in the sand and fail to address the crucial issues of the day.

"This splendid book is a wonderful primer on the world and culture of the madrasa. Given the importance of madrasas to American political interests in the Muslim world, I cannot imagine a more timely book. Ebrahim Moosa, with his firsthand knowledge of the madrasa culture in the Indian subcontinent, writes as very few people can about being an insider in a way that is highly accessible to general readers and students who don’t know about madrasas or Islam. Extraordinary."
— Amir Hussain, author of Oil and Water: Two Faiths, One God

"Offering a historically informed insider account of the madrasa, Ebrahim Moosa presents a view of the madrasa which is very different from what has often been purveyed by the media. Enriched by Moosa’s account of his return to several madrasas nearly four decades after he had first arrived at them—this time as a seasoned observer rather than as a young and impressionable student—the book puts the madrasa's intellectual concerns in their historical context, dispels myths, and provides a critique of contemporary madrasas. Presuming no prior acquaintance with Islam or the madrasa, it is accessible to a broad readership and will be read with interest by general readers, college students, journalists, policy analysts, and by anyone else who wishes to understand this seemingly peculiar but key Muslim institution."
— Muhammad Qasim Zaman, author of Modern Islamic Thought in a Radical Age: Religious Authority and Internal Criticism

"Ebrahim Moosa takes us on a revealing tour of Madrasas past and present as well as his own alma mater. It is a truly eye-opening and informative analysis that we—Muslims and non-Muslims alike—will ignore at our peril. What is a Madrasa? should be on top of everyone's reading list."
— Ziauddin Sardar, editor of Critical Muslim, and author of Desperately Seeking Paradise and Mecca: The Sacred City