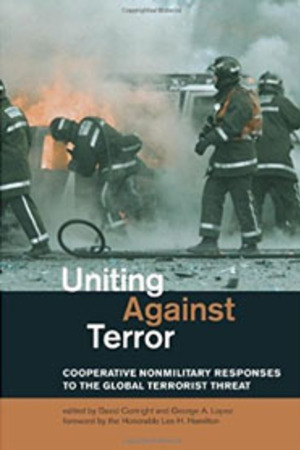 Edited by David Cortright and George A. Lopez

As terrorist attacks continue around the world, from London and Madrid to Afghanistan and Iraq, questions multiply about the effectiveness of current antiterrorist strategies.

Uniting Against Terror, edited by George A. Lopez and David Cortright, argues that defeating the global terrorist threat requires engaging international financial, diplomatic, intelligence, and defense communities and law enforcement organizations in an atmosphere of cooperation. It examines cooperative diplomatic and economic policies to address the changing face of terrorism and the global Al Qaida threat, differentiates between protective measures and long-term preventive policies, and makes recommendations for effective cooperative nonmilitary strategies.

"Cortright and Lopez have done a huge service to all those interested in pursuing the pros and cons of an activist foreign policy, short of the recourse to war....The thoughtful, and characteristically low-key but potent, foreword by former Congressman Lee Hamilton is worth a read in itself. Altogether, a major contribution."
— A. Peter Burleigh, Former U.S. Ambassador to the United Nations (1997-1999)