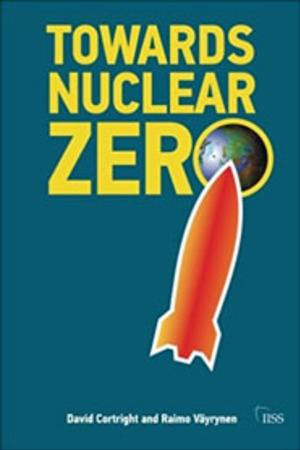 This book is co-published by Routledge and the International Institute for Strategic Studies, a leading think tank focused on international security.

Rarely in the atomic age have hopes been raised as high as they are now for genuine progress toward disarmament. The new receptivity reflected in the policy declarations of many governments was sparked by a wave of private initiatives led by former senior policy leaders in many countries.

The book places the current debate over nuclear abolition in the context of urgent non-proliferation priorities and the need to prevent nuclear weapons from falling into the hands of extremist regimes and terrorists. It examines the reasons why more than two dozen states have given up nuclear programs over the years and distills lessons from the end of the cold war to offer policy recommendations for moving toward lessened global reliance on nuclear weapons.

Also included are in-depth analyses of proliferation challenges and disarmament opportunities in North Korea and Iran. The book concludes with a detailed roadmap for moving progressively toward global nuclear zero. It proposes a new international security regime based on shared missile defenses, nonweaponized deterrence, and greater efforts to enhance transnational cooperation.

“An important volume which makes the case that ending our reliance on nuclear weapons is a policy for the realist, not just for the visionary, and that outlines some of the practical steps that could help to achieve that goal.”
— Margaret Beckett, former UK Foreign Secretary

“A valuable contribution that shows how nations can be more secure in a world without nuclear weapons, and that charts the specific policies that can lead in that direction.”
— William Perry, former U.S. Secretary of Defense and professor at Stanford University