Contested Frontiers in the Syria-Lebanon-Israel Region: Cartography, Sovereignty, and Conflict 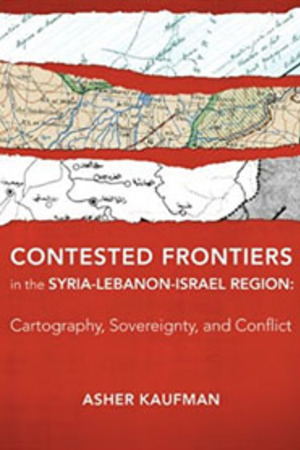 Contested Frontiers studies one of the flash points of the Middle East since the 1960s—a tiny region of roughly 100 square kilometers where Syria, Lebanon, and Israel come together but where the borders have never been clearly marked.

This was the scene of Palestinian guerrilla warfare in the 1960s and '70s and of Hezbollah confrontations with Israel from 2000 to the 2006 war. At stake are rural villagers who live in one country but identify themselves as belonging to another, the sources of the Jordan River, part of scenic and historically significant Mount Hermon, the conflict-prone Shebaa Farms, and a defunct oil pipeline.

Asher Kaufman uses French, British, American, and Israeli archives; Lebanese and Syrian primary sources and newspapers; interviews with borderland residents and with UN and U.S. officials; and a historic collection of maps. He analyzes the geopolitical causes of conflict and prospects for resolution, assesses implications of the impasse over economic zones in the eastern Mediterranean where Israel, Lebanon, Cyprus and Turkey all have claims, and reflects on the meaning of borders and frontiers today.

"Kaufman examines the connections and links that complicate the problem of the tri-border region between Lebanon, Syria, and Israel in a sensitive and sympathetic manner. Moreover, the work manages to explain a complex technical and factual problem in a straightforward manner."
— Nadim Shehadi, Chatham House

"Kaufman has knitted together maps, archives, and other sources to give a comprehensive view of a collection of issues (fuzzy borders, water resources, state sovereignty, and non-state actors) in a complicated little corner of the Levant that has not hitherto received serious academic treatment. Given that this little corner is crucial to the future of relations among the three states, the author has done a major service in offering a rigorous, balanced, detailed, and fascinating interpretation."
— William Harris, author of  The Levant: A Fractured Mosaic