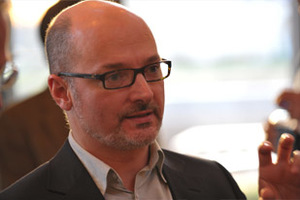 As a senior analyst for the International Criminal Court in The Hague, Agirre reviews and analyzes witness statements, videos, photographs, and other evidence documenting human rights violations committed by governments and criminal groups.

While on campus to receive the award, Agirre met with peace studies students and discussed his work in a public lecture: “Make Law, Not War: On the Power of Truth, Law, and Justice.”

The ICC was established in The Hague, The Netherlands in 2002 as a permanent court to prosecute individuals for genocide, crimes against humanity, war crimes, and crimes of aggression. The Court has investigated situations in Northern Uganda, the Democratic Republic of the Congo, the Central African Republic, and Darfur.  This month, the court indicted Sudanese President Omar Hassan al-Bashir on three counts of genocide, five counts of crimes against humanity, and two counts of war crimes.