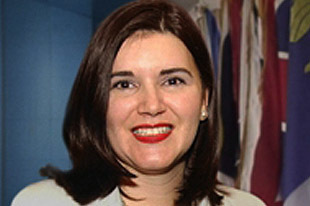 Oana-Cristina Popa has been ambassador of Romania to the Republic of Serbia since 2016. She also served as the ambassador to Croatia from 2005-2010.

Previously, Oana held diplomatic positions at the Romanian embassy in Zagreb, Croatia, and in the Romanian Ministry of Foreign Affairs. She has been twice honored by the president of Romania with medals of diplomatic merit, which she received in 2002 and 2008. Between 1998 and 2002, she was executive director of the Romanian-U.S. Fulbright Commission in Bucharest.

Born and raised in Romania, Oana now lives in Belgrade, Serbia. After earning her master's degree in peace studies at the Kroc Institute, she earned a Ph.D. in history and international relations from the Babeş-Bolyai University in Cluj, Romania.

"I have always been interested in international affairs," Oana said. "But it was at the Kroc Institute that I became excited about the idea of a career in diplomacy."

"When you're an ambassador you don't just deal with bilateral relations between two countries," she said. "You deal with issues that involve entire regions, third parties, and international organizations. You need to discuss many topics knowledgeably. The Kroc Institute helped me learn to accumulate large amounts of information in a short period of time."