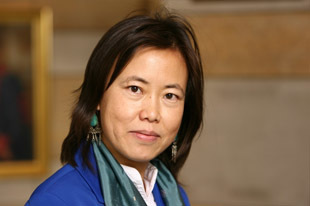 Hannah Wu is the Secretary for the Working Group on the issue of discrimination against women in law and in practice. The group is part of the Special Procedures Branch of the Office of the UN High Commissioner for Human Rights (UNHCHR). Hannah works from the UNHCHR headquarters in Geneva. Founded in Sept. 2010, the Working Group's focus is on identifying and promoting best practices, in cooperation with States and other actors, for the elimination of laws that discriminate against women. The working group has also studied and produced reports on discrimination of women in several spheres: political and public life, economic and social life, cultural and family life and health and safety. Originally created with a three-year mandate, and has subsequently been extended for two additional terms, most recently in June 2016.

Prior to taking on this role, Wu served as a human rights specialist with UNHCHR and headed the Secretariat for the Independent International Commission of Inquiry on the Syrian Arab Republic.

The Commission investigated alleged violations of international human rights and humanitarian law, and when possible, identified the responsible parties.

Of this work, Hannah said, "It's a privilege to be entrusted with such an important responsibility, as there are important connections between accountability and peace. But it's also very difficult to witness such tragedy."

Previously, Hannah worked for the UNHCHR office in Bangkok, Thailand, where she worked closely with civil society and government representatives around the world to implement human rights norms such as the right to liberty, freedom from torture, and protection from arbitrary arrest. Her work has taken her to Albania, Cambodia, China, Macedonia, Nepal, Papua New Guinea, Tajikistan, and many other places.

Hannah left her home in Shenyang in northern China to earn an undergraduate degree at Manchester College in Indiana, where she learned about Notre Dame's Kroc Institute. After graduating with her master's degree in international peace studies, she taught high school in Washington, D.C. In 1991, she took a year-long internship with the Women's International League for Peace and Freedom in Geneva and New York, followed by more than a year with the United Nations Transitional Authority in Cambodia.

"When I left the Kroc Institute, I took more than a master's degree away with me," she said. "I also took an invaluable life experience." She credits her professors with instilling in her a vision of a world in which human rights are respected.

Hannah returned to Notre Dame in 2005 when she was honored with the Kroc Institute's Distinguished Alumni Award.