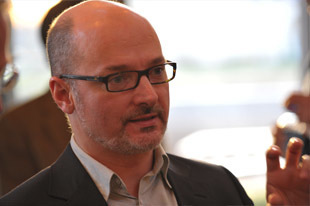 Xabier Agirre Aranburu works at the heart of the International Criminal Court (ICC) in The Hague, investigating crimes against humanity in multiple situations around the world. As a senior analyst in the Office of the Prosecutor, he reviews and analyzes hundreds of witness statements, videos, pictures, and other evidence documenting atrocities committed by governments and criminal groups.

Xabier started working at the ICC in 2004, with the first team that set up the Office of the Prosecutor. As a permanent court founded in 2002, the ICC investigates and prosecutes individuals for genocide, crimes against humanity, war crimes, and the crime of aggression. The Hague houses more than 150 international legal organizations.

"We work to solve the enigmas of crime using the highest standards of evidence," Xabier said. "We collect all kinds of documents and data and we meet hundreds of victims and witnesses, including witnesses who once were members of criminal groups – it's fascinating work."

Originally from Spain's Basque country, Xabier first arrived in The Hague in 1997 to work for the UN International Criminal Tribunal for the former Yugoslavia (ICTY), the court that indicted former Yugoslav President Slobodan Milošević.

Xabier first learned about work in The Hague through the Kroc Institute's alumni network. "The Kroc Institute introduced me to a whole new world of work and projects," Xabier said. "My experience at Kroc helped me learn to how to work effectively in a multicultural, multinational environment."

Xabier has contributed to multiple training programs around the world and he has lectured in a number of universities in the Americas and Europe. He returned to Notre Dame in 2009 to accept the Kroc Institute's Distinguished Alumni Award.