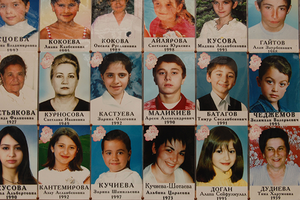 Join the Kroc Institute for the book launch of Debra Javeline's "After Violence: The Beslan School Massacre and the Peace that Followed."

Starting on September 1, 2004, and ending 53 hours later, Russia experienced its most appalling act of terrorism in history, the seizure of School No. 1 in Beslan, North Ossetia. Approximately 1,200 children, parents, and teachers were taken hostage, and over 330 —nearly one of every hundred Beslan residents— were killed, hundreds more seriously wounded, and all severely traumatized. "After Violence" is the first book to analyze the aftermath of such large-scale violence with evidence from almost all direct victims. It explores the motivations behind individual responses to violence.

When does violence fuel greater acceptance of retaliatory violence, and when does violence fuel nonviolent participation in politics? The mass hostage taking was widely predicted to provoke a spiral of retaliatory ethnic violence in the North Caucasus, where the act of terror was embedded in a larger context of ongoing conflict between Ossetians, Ingush, and Chechens. Politicians, journalists, victims, and other local residents asserted that vengeance would come. Instead, the hostage taking triggered unprecedented peaceful political activism on a scale seen nowhere else in Russia. Beslan activists challenged authorities, endured official harassment, and won a historic victory against the Russian state in the European Court of Human Rights.

"After Violence" provides insights into this unexpected but preferable outcome. Using systematic surveys of 1,098 victims and 2,043 nearby residents, in-depth focus groups, journalistic accounts, investigative reports, NGO reports, and prior scholarly research. "After Violence" offers novel findings about the influence of anger, prejudice, alienation, efficacy, and other variables on post-violence behavior.