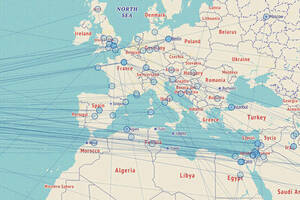 Alie Ataee is an Afghanistani writer born in 1981. A graduate of theater studies, she is an award-winning writer in Iran and the author of two novels and a short story collection, Dreams of the Hindu Kush. She currently lives in Tehran.
Atiq Rahimi, born in Kabul in 1962, is a French-Afghanistani writer and filmmaker. In 1984, Rahimi’s family went into exile, and after studying at the Franco-Afghanistani lycée, he joined his father in Bombay. In 1979, he returned to Afghanistan to read literature at the University of Kabul, and worked as a cinema critic. In 1984, he relocated to Pakistan for a brief period, before seeking political asylum in France. He completed his PhD in audio-visual communications at the Sorbonne, and began writing Earth and Ashes in 1996. After 18 years in exile, Atiq Rahimi returned to Afghanistan in February 2002 and helped establish an Afghanistani writers’ centre in Kabul, with the assistance of the French government. Rahimi is the recipient of a number of prestigious literary and film awards. In 2004, he won the Prix du Regard vers l’Avenir at the Cannes Film Festival and a Golden Dhow award for Best Feature Film at the Zanzibar International Film Festival for his film version of Earth and Ashes. In 2008, he was awarded the Prix Goncourt for The Patience Stone – France’s highest literary honour. Rahimi directed 2012 the film adaptation of The Patience Stone from a screenplay he co-authored with Jean-Claude Carrière.
The conversation will be moderated by Amir Ahmadi Arian, who has published short stories and essays in The New York Times, New York Review of Books, Paris Review, The Guardian, London Review of Books, Massachusetts Review, and elsewhere. His first novel in English, Then The Fish Swallowed Him, was published by HarperCollins in 2020. He earned a Ph.D. in Comparative Literature from the University of Queensland in Australia, and an MFA in Creative Writing from NYU.​ He teaches literature and creative writing at City College, New York.
The conversation will take place in Farsi, with English interpretation provided by Nasim Fekrat, an award-winning blogger, journalist, and photographer from Afghanistan. He has written for the BBC, CNN, Foreign Policy Magazine, the Nieman Watchdog Foundation (now Nieman Reports), and the UN. He holds a BA in political science from Dickinson College, an MA in religious studies from the University of Georgia, and an MA in anthropology from UNC Charlotte. He's currently a PhD student in the Department of Anthropology at UC Irvine with a focus on the Hazaras' struggle for equal rights and belonging within the context of Afghanistan, nationalism, migration, and the geopolitics of South Asia and the Middle East.
Literatures of Annihilation, Exile, and Resistance, launched by Azareen Van der Vliet Oloomi, is a research collective and lecture series co-sponsored by the College of Arts and Letters and the Kroc Institute for International Peace Studies at the University of Notre Dame, and housed at the newly launched Initiative on Race and Resilience, directed by Mark Sanders, Professor of English and Africana Studies. The series focuses on contemporary literature, film, and visual art that has been shaped by revolutionary and resistance movements, decolonization, migration, class and economic warfare, communal and state-sanctioned violence, and human rights violations. We aim to theorize new modes of contemporary literary and artistic resistance across national borders and to amplify the voices of scholars, artists, and writers of color whose lived experience is instrumental in forging new alliances across formal, linguistic and national boundaries.