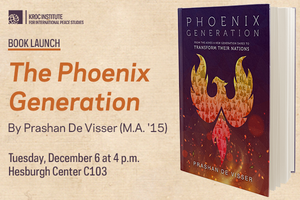 Youth activism has seen a startling rise across the world. Young people seek to stand up against hate, prejudice, violence, and corruption by creating grassroots movements to respond to conflict in their nations. These youth movements understand that it's their future at stake. So they refuse to be silent and watch helplessly as their nations crumble.

Can their efforts truly make a difference? Is sustainable change possible? Can youthful exuberance and relentless, creative, homegrown efforts be the missing ingredient that will finally bring about transformative change in many nations that seem to be spiraling from bad to worse? Or are these efforts immature, reactionary and unable to fully understand or address the complexities of the challenges, becoming eventual failures?

De Visser believes youth can bring about transformative change, and many of these grassroots movements possess vital ingredients missing from orthodox efforts thus far. However, only some efforts succeed, and many fail to have a sustainable impact. This book looks at key elements that help well-intentioned efforts and initiatives morph into movements that can bring about historical change and transform their nations.

Join us for December 6, 2022, for a book launch featuring a talk with De Visser. Copies of "The Phoenix Generation" will be available to order after the event.