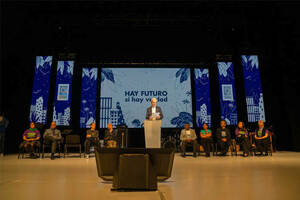 Francisco De Roux, the head of a government-appointed truth commission, speaks during the presentation of the commission’s report on Tuesday, June 28, 2022, in Bogota, Colombia. (Federico Rios/The New York Times)

Colombia’s Truth Commission was established by the 2016 FARC peace accord to address the country’s ongoing six-decade old conflict that has affected more than nine million registered victims. The Commission released their final report on June 28 — the culmination of exhaustive research and interviews with nearly 24,000 people across the country and in exile abroad. In the weeks since, the Commission has held dozens of events throughout Colombia to share its findings and recommendations for pursuing an end to the armed conflict and the beginning of national reconciliation.

Beginning in September, a Follow-up and Monitoring Committee will support the implementation of the Commission’s recommendations. However, in the final weeks of their three-year mandate, the Committee is continuing to bring the findings of its report to the public’s attention — both within Colombia and internationally.

Join USIP, the Washington Office on Latin America, the Colombia Human Rights Committee, the Latin America Working Group, Humanity United and the Kroc Institute for International Peace Studies as we host three commissioners for the first international presentation of their final report. The discussion will look at the Commission’s findings and recommendations as well as the impact and lasting legacy of the commission’s participative methodologies and transformative dialogue processes with victims and perpetrators.

Take part in the conversation on Twitter using #HayFuturoSiHayVerdad.

Alejandra Miller
Truth Commissioner, Commission for the Clarification of Truth, Co-existence and Non-Repetition

Saúl Franco
Truth Commissioner, Commission for the Clarification of Truth, Co-existence and Non-Repetition