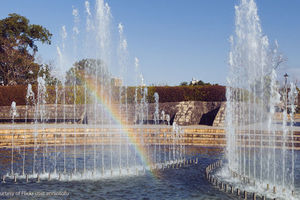 On August 6 and 9, 1945, two atomic weapons were detonated over the Japanese cities of Hiroshima and Nagasaki. The bombs shattered the cities, immediately killing upwards of 80,000 people in Hiroshima and 35,000 people in Nagasaki. For months and years afterward, people continued to die from burns, radiation sickness, and other injuries. On a visit to Nagasaki in November 2019, Pope Francis spoke forcefully on the abolition of nuclear weapons, saying “A world of peace, free from nuclear weapons, is the aspiration of millions of men and women everywhere. To make this ideal a reality calls for involvement on the part of all.” This year on the seventy-fifth anniversary of the bombings, prominent Catholics in the United States and Japan are working together in solidarity and friendship to promote a world free of nuclear weapons.

Building on the Holy Father’s appeal, this commemoration recalls in solidarity the tragic devastation wreaked by nuclear warfare. Archbishop Mitsuaki Takami and Bishop David Malloy offer short reflections on the meaning of the bombings today. Archbishop Takami recalls the personal tragedies inflicted on his family, Bishop Malloy speaks to the need for nuclear disarmament, and together they offer prayers for peace. The event is moderated by Dr. Maryann Cusimano Love and incorporates a visual memorial of the destruction in Hiroshima and Nagasaki.

This event is hosted by Georgetown University’s Berkley Center for Religion, Peace, and World Affairs and the Catholic Peacebuilding Network, in partnership with the University of Notre Dame’s Kroc Institute for International Peace Studies, Keough School of Global Affairs; Northwestern University’s Sheil Catholic Center; the Catholic Bishops' Conference of Japan, Japan Catholic Council for Justice and Peace; the United States Conference of Catholic Bishops, Office of International Justice and Peace; Catholic University of America’s Institute for Policy Research and Catholic Studies; the International Federation of Catholic Universities; and Pax Christi International. This is one of a series of initiatives of the Project on Revitalizing Catholic Engagement on Nuclear Disarmament.