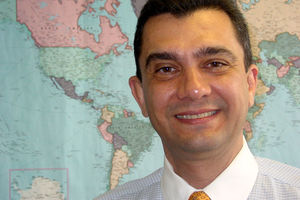 Fueled by gangs, drugs, social inequalities, and underemployment, criminal violence in Central America has skyrocketed in the past two decades. This has, in turn, eroded trust in government and stifled economic development, thereby perpetuating violence. What can be done to interrupt this cycle?

Stadthagen will outline the roles of primary, secondary, and tertiary violence prevention and integrated programs for stemming regional criminal violence. Drawing on academic findings, he will discuss the “state of the art” in violence prevention, describing successful interventions, such as USAID’s community-based Regional Youth Alliance and Honduras Youth Alliance, crime and violence prevention projects implemented by Creative Associates, which led to the development of more than 200 outreach centers in gang-affected neighborhoods of El Salvador and Honduras.

Explaining how community-based programs can be successfully paired with family counseling and public-private partnerships to help high-risk youth to build lives outside of gangs, he will suggest paths for collaboration between practitioners and scholars in meeting the challenge of violence prevention in Central America.

Now a senior advisor with Creative Associates International, Stadthagen has worked with the organization since 2008, developing deep expertise in primary, secondary, and tertiary violence prevention, including juvenile justice and social reinsertion of former gang members.

Previously, he served as Nicaragua’s secretary for international cooperation and economic relations, deputy minister of foreign affairs, and ambassador to the United States and Canada and to Taiwan. Among other efforts, he led the Education for Democracy Program, funded by the National Endowment for Democracy and USAID.