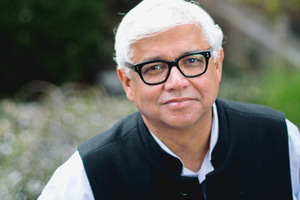 War, Race and Empire in the Anthropocene: Some Occluded Aspects of Climate Change

The fact that the discussion of climate change has largely been centered in Western universities has skewed the discourse in certain directions. Since much of it is produced by scientists, engineers and economists the subject has widely come to be conceptualized as essentially an economic problem which can be dealt with through technological and technocratic fixes. Those who take a more political approach, like Naomi Klein and George Monbiot, also conceive of the issue in economic terms, framing it in relation to capitalism or neo-liberalism. These frameworks tend to exclude many of the overarching cultural, political, geographical and historical contexts of global warming. This talk poses the question: what other frameworks could be relevant to this subject?

This lecture is free and open to the public.

Co-sponsored by the Department of English, the Liu Institute for Asia and Asian Studies, and the Henkels Lecture Fund, Institute for Scholarship in the Liberal Arts, College of Arts and Letters, University of Notre Dame.

Amitav Ghosh was born in Kolkata (formerly Calcutta) and grew up in India, Bangladesh and Sri Lanka. He studied in Delhi, Oxford and Alexandria and is the author most recently, of The Great Derangement: Climate Change and the Unthinkable, a work of nonfiction. His novels include The Circle of Reason, The Shadow Lines, In An Antique Land, Dancing in Cambodia, The Calcutta Chromosome, The Glass Palace, The Hungry Tide, and The Ibis Trilogy: Sea of Poppies, River of Smoke, and Flood of Fire.

The Circle of Reason was awarded France’s Prix Médicis in 1990, and The Shadow Lines won two prestigious Indian prizes the same year, the Sahitya Akademi Award and the Ananda Puraskar. The Calcutta Chromosome won the Arthur C. Clarke award for 1997 and The Glass Palace won the International e-Book Award at the Frankfurt book fair in 2001. In January 2005 The Hungry Tide was awarded the Crossword Book Prize, a major Indian award. His novel, Sea of Poppies (2008) was shortlisted for the Man Booker Prize, 2008 and was awarded the Crossword Book Prize and the India Plaza Golden Quill Award.

Ghosh’s work has been translated into more than twenty languages and he has served on the Jury of the Locarno Film Festival (Switzerland) and the Venice Film Festival (2001). Ghosh's essays have been published in The New Yorker, The New Republic and The New York Times, and collections of his essays have been published by Penguin India (The Imam and the Indian) and Houghton Mifflin USA (Incendiary Circumstances). He has taught in many universities in India and the USA, including Delhi University, Columbia, Queens College and Harvard. In January 2007 he was awarded the Padma Shri, one of India’s highest honours, by the President of India. In 2010, Amitav Ghosh was awarded honorary doctorates by Queens College, New York, and the Sorbonne, Paris. Along with Margaret Atwood, he was also a joint winner of a Dan David Award for 2010. In 2011 he was awarded the International Grand Prix of the Blue Metropolis Festival in Montreal.