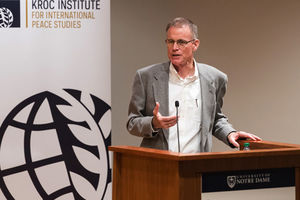 Fr. Dave Kelly, C.PP.S., once managed to gather together a police officer whose house had been burglarized and the young man who had broken in. Kelly, the longtime executive director of the Precious Blood Ministry of Reconciliation, was working on Chicago’s South Side. Convening a “peace circle” with the victim, the offender, and other community members, Kelly and fellow participants talked for hours about what led up to the crime, as well as its aftermath.

Ultimately the police officer had one request: that the teenage burglar, who had been expelled, get back in school. The officer then gave the young man his business card and offered to shoot hoops with him. Not only did they play basketball after that day, they also launched a mentoring relationship. Even Fr. Kelly was stunned at the power of peace circles, a practice of the expanding restorative justice movement—and one that is sparking study at the University of Notre Dame and beyond.

Fr. Kelly spoke about his experiences with restorative justice at Notre Dame recently at the behest of Jason Springs, the Kroc Institute’s Director of Doctoral Studies. “I’ve been in court thousands of times,” Kelly said. “And I’ve never seen the victim become a mentor to someone who did him harm, who burglarized his home. Crime is primarily a crime of relationships, not of a code of conduct, so the work is to repair the relationships that are fractured by that crime.”

Kelly shared his “40 years of stories” on Oct. 5, when he spoke as part of the 19th Annual Dialogues on Nonviolence, Religion and Peace. The Kroc Institute is engaging with Kelly’s Precious Blood Ministry and its restorative justice work through the research of professors like Springs and the direct work of students and graduates.

While punitive criminal-justice systems seek simply to punish those who commit crimes, restorative justice is about processes for rehabilitating offenders through reconciliation and accountability with victims and the larger community. The concept, including peace circles, draws on Aboriginal and Native American practices. In the early 1980s, Mennonite peace scholar Howard Zehr brought a modern example to Elkhart, Ind., with a landmark victim-offender reconciliation program. Zehr’s 1990 book, “Changing Lenses,” brought wider attention to restorative justice.

Since then the model has been employed all over the country, in the criminal justice system and beyond, with notable examples in Boston, Oakland and Minneapolis. Its scope is international, too. South Africa’s famous Truth and Reconciliation Commission employed restorative justice to heal from apartheid andNew Zealand’s entire youth justice system is based on a restorative justice framework.

In Chicago, aside from the political caricaturing and media coverage of violence, Kroc scholars have witnessed powerful peacebuilding initiatives happening on the ground. Springs, who is also Associate Professor of Religion, Ethics, and Peace Studies at Kroc, has been studying the initiatives of Kelly and his colleagues for his research project entitled, “Resurrection in the Back of the Yards: Restorative Justice and the New Jim Crow.[1]" Precious Blood sits in Back of the Yards, historically an industrial area that housed meatpacking workers in Chicago’s Union Stockyards. Today, more than 40 years after the stockyards closed, the marginalized neighborhood is often divided by African-American and Latino gang violence.

Fr. Kelly’s ministry is now part of a coalition of seven Community Restorative Justice Hubs around Chicago that bring offenders and victims together in peace circles. The seven groups work hard to stay in sync, sharing five pillars that begin with radical hospitality, as Kelly described during his Notre Dame  lecture.

That deep coordination has impressed Associate Professor Springs. “They’re not just isolated initiatives but are integrated and collaborative,” he notes. “That’s potentially a game-changer.” Springs has invited some of the seven, like the Circles and Ciphers group that fuses hip-hop into its practice, to present to his Kroc classes.

Springs has undergone peace circle training in Chicago and conducted more than 60 site visits, participant observations, and in-depth interviews. He uses a community-engaged research model, which builds relationships with subjects rather than treating them as data. “It’s an organic process of back-and-forth and give-and-take as you fashion your research question, but you do so in a way that strives to benefit the people you’re studying,” Springs says. Ultimately he plans to produce a book that can be useful to both his fellow scholars and restorative justice participants themselves.

Recent Kroc Institute graduate Leah Landry, BA ’17, is also learning from Fr. Kelly and his Precious Blood Ministry colleagues. She and fellow Notre Dame graduate Hector Avitia, BBA ’10, are currently undertaking a year of service, living and working full-time on the South Side. Landry is already helping expand the scope of restorative justice there. In September she started a Young Women’s Program at the request of community members. The group meets twice a month, once for a peace circle and once for a fun, stimulating outing like a visit to the aquarium or an art class.

“When the young men in the neighborhood are locked up or shot, that’s awful, but the young women are often forgotten and have to carry the burden,” Landry says. “The cycle of intergenerational poverty, racism, the criminal justice system—if we’re working in a neighborhood, we have to engage with all sides of it. We’re trying to make all our programming very restorative for the staff and young people, using restorative justice as our lens all the time.”

Springs hopes to deepen relationships between the University and restorative justice peacebuilders, inviting local leaders, students, professors, and alumni back and forth between South Bend and Chicago for ongoing visits and projects. “As we think globally about issues of peace,” he says, “we also try to engage regionally and locally.”

[1] In her 2010 book, Michelle Alexander coined the term “The New Jim Crow” to refer to mass incarceration, especially of African-American males, in the United States.