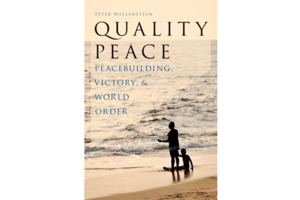 Violent conflict between two warring parties comes to an end when a peace agreement is reached or one party surrenders to another.

But after arms are laid down, what determines if peace is to last?

A new book by peace scholar Peter Wallensteen sets out to answer this question. In his new book Quality Peace: Peacebuilding, Victory & World Order (Oxford University Press), Wallensteen offers a broad analysis of peacebuilding, explaining what does and does not prevent recurrent violence when terminating conflicts.

“Peacebuilding aims to make the previous war the final one,” said Wallensteen, the Richard G. Starmann Sr. Research Professor of Peace Studies at Notre Dame’s Kroc Institute for International Peace Studies. “But ‘quality,’ or lasting peace is more than the absence of war.”

Wallensteen used statistical analysis to study two war outcomes — negotiated settlement and victory — in the post-Cold War era. He determined that if peace is to last, three conditions must be met in post-conflict societies: respect for human dignity; physical security for all; and predictability, meaning that time allotted for a settlement must be long enough to ensure normalcy.

“Peacebuilding is a long-term project, often without a clear end point,” Wallensteen said.

Research in Quality Peace, based in part on data from the Kroc Institute’s Peace Accords Matrix, also demonstrates that negotiated settlements are more likely to generate peaceful conditions than victory, Wallensteen said.

Other books in the series include:

“Wallensteen has produced a significant, timely, and rich analysis of the possibilities for Quality Peace … in the aftermath of conflict between states, internal conflicts over government, and internal conflicts over state formation and territory,” writes Michael Stohl, Director of the Orfalea Center for Global and International Studies at the University of California, Santa Barbara.

“The detailed analyses of cases and data and the detailed principles presented as testable hypotheses in the conclusion make this the foundational analysis for all subsequent analyses of peaceful (and failed) outcomes.”

Wallensteen, widely known as a leading international peace researcher, also is a Senior Professor in the Department of Peace and Conflict Research at Sweden’s Uppsala University, where he directed the Uppsala Conflict Data Program for nearly 40 years. He has spent fall semesters in residence at Notre Dame since 2006, when he joined the faculty of the Kroc Institute.