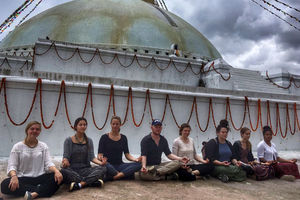 While immersing themselves in a fascinating blend of Indian, Pakistani, and Nepali cultures, ND students took a moment to strike a meditative pose on Boudhanath, a monument that has drawn pilgrims for thousands of years.

CNN headlines flashed in the background as Kroc Institute professor Mahan Mirza sat down to lunch with Scott Appleby and his spouse Barbara Lockwood in the shadow of the Himalayas in Kathmandu, Nepal. On the screen was the usual: a smorgasbord of Trump, immigration, ISIS, Russia, “Muslim Ban.” They had just checked into Yatri Suites & Spa, a hotel in Thamel, the tourist ghetto deep in the heart of Kathmandu. Appleby, Dean of Notre Dame’s Keough School of Global Affairs and expert in religion, was there to teach graduates of madrasas (Islamic seminaries) from India and Pakistan along with undergraduates from Notre Dame (ND) as part of the Madrasa Discourses project. The groups of students were meeting for the first time. Over two weeks the madrasa and Notre Dame students were exposed to intensive teaching and dialogue on citizenship, religion, and society in a pluralistic and changing world, sensitive to the oppositional narratives of Islam versus West. Even in the narrow winding streets of Nepal, drenched daily with monsoon rains, there was no escape from the news media which equate the word “madrasa” with everything toxic in Islam.

“In popular western media parlance,” writes Notre Dame Professor Ebrahim Moosa in his book What is a Madrasa?, “the mere mention of the word ‘madrasa’ conjures up an ‘us vs. them’ dynamic." In light of the charged media rhetoric vis-à-vis Islam, it was natural for the seven Notre Dame students to feel apprehensive about their encounter with participants from entirely different cultural backgrounds. But it was surprising to find that even the Indian participants—who live as minorities in a pluralistic and secular society—were unsure of what to expect from their counterparts from the Islamic Republic of Pakistan. Would the Pakistanis be open to secularism and alternative conceptions of faith and the good life? Would they be dangerous? All the participants with a madrasa background were male, except for one female from Pakistan, clad in a traditional black flowing gown (abaya) with a face-veil (niqab). The Notre Dame undergraduates, by contrast, were all female, selected from a pool of applicants not for their gender, but on merit. The stage was set. 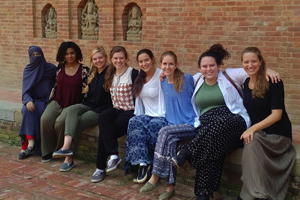 Mirza is the faculty and program manager for the three-year Templeton Foundation-funded project aimed at advancing the theological and scientific literacy of madrasa students, a project directed by Ebrahim Moosa. Housed in a research initiative within the Kroc Institute for International Peace Studies, a part of the Keough School of Global Affairs, the project launched in January of this year, and the trip to Kathmandu was the first international component. The summer intensive would either be a dream or a nightmare for the Keough School, which aims to “advance integral human development through transformative educational programs.” It would be a dream if everyone got along, engaged in deep conversations, and ended up transformed. It would be a nightmare if gender dynamics grew tense, language barriers could not be overcome, and frustrations solidified stereotypes. Instructors and mentors on all sides had done their best to prepare the participants for the encounter, but no amount of preparation could eliminate the unpredictability inherent in human interpersonal relations in entirely new contexts. The program was a living laboratory for the Contending Modernities initiative, whose goal is to “generate new knowledge and greater understanding of the ways in which religious and secular forces interact in the modern world.”

Scott Appleby led discussions for the first three days on secularism, modernity, and fundamentalism. Armed with new conceptual tools, students engaged in small group discussions in the late afternoons to address specially crafted prompts: “I would prefer to live in a religious rather than secular society”; “Does a madrasa education form students to lean towards fundamentalism or are they open to modernity?”; “As a woman or minority, do you think that you can flourish in a society where Sharia norms prevail?” These questions invited madrasa graduates to explain the meaning of Sharia, its sources, and how it is to be applied today, to an audience that, for the most part, carried conceptions of Islam shaped by the media and popular culture in the West. At the same time, the participants from the United States could voice their alternative perspectives on human flourishing and “the good” that might be at odds with Sharia-driven norms as articulated by the madrasa graduates.

These conversations spilled over into the field trips, the dining hall, cafes and restaurants, and the daily walks through the streets of the Thamel district. The outcome was no less than miraculous. “I am amazed at how quickly we were able to form friendships and find common ground,” wrote Kirsten Hanlon, a rising ND junior in neurology, adding: “This program has inspired me to think more carefully about my faith, scholarly interests, and unwarranted perceptions about others.” Molly Burton, a triple major in philosophy, gender studies, and peace studies, found her interactions with a highly-educated woman from Pakistan eye-opening: the summer experience helped her understand “why women cover themselves,” why an “amazingly strong pious woman” would wish to maintain a lifestyle, by free choice, “that few Americans understand.” Nabila Mourad, a Brazilian student at Notre Dame of Lebanese Muslim heritage, discovered the need to consider more deeply her own narrative and purpose in life. 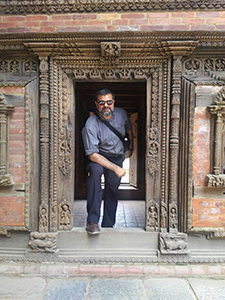 Muhammad Furqan, the youngest participant from among the Madrasa scholars in Delhi, said: “Although it was my first encounter with American students, it was a beautiful experience for me which I never want to forget.” Waqas Ahmad, hailing from Khayber Pakhtunkhwa, formerly the Northwest Frontier Province of Pakistan, called the program a turning point in his life: “Someone who is born in the subcontinent and raised in a typical Islamic environment can never expect that he will be honored someday with an opportunity of learning from multi-lingual scholars and an opportunity of interaction with multi-lingual students.” Sumera Rabia, the sole female participant from the group of madrasa graduates, spoke admiringly about her counterparts from the United States, whom she referred to on the very first day as her seven sisters: “The interaction with Notre Dame was an amazing experience…Their toleration and respect of other’s opinions is a thing which we should have.”

An interactive series of lectures and workshops exposed students to the new social and political realities of our age that contemporary formulations of Sharia often have to contend with. Local activists based in Nepal, including Prakash Bhattarai and Shubham Amatya, both Master’s alumni of Notre Dame’s Kroc Institute for International Peace Studies, discussed gender equality and social change in light of UN mandates and global norms on human rights. Ebrahim Moosa emphasized the need to view Sharia not as a collection of ahistorical rules and commandments, but rather as attempts by well-meaning yet fallible humans to draw on divine revelation to articulate historically contingent expressions of the common good. Leela Prasad, professor of religious studies at Duke University, drew on Hindu Advaita philosophy and the concept of “co-being” to invite students to think about the complex ways in which humans draw on diverse religious traditions to heal the world and live ethical lives.

The program culminated with Mohammad Fadel, a renowned legal scholar at the University of Toronto, who discussed strategies to reconcile Sharia norms with the evolving international consensus on human rights. Drawing on the political philosopher John Rawls, Fadel argued that it is theoretically possible to forge an overlapping consensus between historical Islam and political liberalism without violating the principles or integrity of either. Bringing the summer intensive full circle, Fadel maintained the thesis that Islamic law, contrary to popular understanding, was inherently secular in its conception in that it provided formal rules to allow humans to flourish and live ethically in this world. He responded effortlessly to challenges by students with historical examples, highlighting Moosa’s point that Sharia norms must be understood historically in pursuit of the common good. Professor Fadel’s intervention was especially poignant given that he drew on scholars from the West African Maliki madhhab (school of thought) represented by scholars like al-Qarafi and al-Shatibi to impress a South Asian audience that is entirely Hanafi (another school of jurisprudence) in training and formation. Ammar Khan Nasir and Waris Mazhari, the lead faculty from Pakistan and India respectively, by contrast, led students through classical Arabic texts authored by Hanafis such as Abu Bakr al-Jassas and Ibn ʿAbidin al-Shami to reinforce the hermeneutics of Fadel and historicism of Moosa. Mazhari and Nasir also drew on the rich tradition of ethics in Islamic thought in matters related to human dignity, advocating the need to once again make human dignity central in matters of jurisprudence. 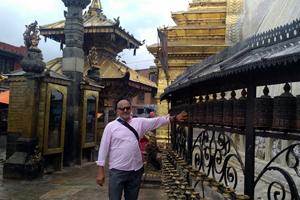 Prof. Moosa spins prayer wheels, on which are written the mantra 'Om Mani Padme Hum.' Buddhists spin these wheels as a form of prayer, as they circle the Swayambhunath Stupa.

The summer intensive in Nepal is the first of many that students will participate in over the next three years. Yet even if the program had ended here, it would still be considered a resounding success for the deep reflection and personal transformation it engendered in participants. If anything, such programs indicate the power of human interaction to effect change, if the conditions are ripe. Take intelligent and well-trained students, prepare them well, put them together with other students, equally bright and eager, from an entirely different background, invite scholars who are experts in their field, and let the magic happen.

Making magic of this kind is precisely the vision of Ebrahim Moosa, himself a madrasa graduate and the architect of Madrasa Discourses: “I remain a friendly critic of madrasa education, acknowledging its inability to provide the big picture of Islamic ideas and its failure to effect the intellectual transformation of contemporary Muslim societies, especially in the sphere of religious thought. Yet madrasas can offer something of enormous value—provided they are effectively upgraded in the knowledge stakes” (29). In the shade of the Himalayas, one thing was clear: we have mountains to climb, but we have taken our first steps.