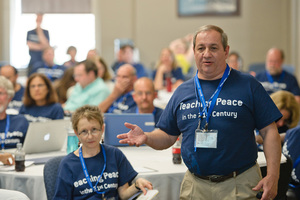 George A. Lopez, Rev. Theodore M. Hesburgh, C.S.C., Professor Emeritus of Peace Studies at Notre Dame and the founder of the Summer Institute, presents at a session during the 2013 Summer Institute for Faculty on the University of Notre Dame campus.

In a year when the symbolic “Doomsday Clock,” run by the Bulletin of the Atomic Scientists, inched closer to midnight, signaling that the world is “not only more dangerous now than it was a year ago” but “is as threatening as it has been since World War II,” the Kroc Institute for International Peace Studies is preparing to host its tenth annual Summer Institute for Faculty (SI). The SI is a week-long training for academics who want to launch or strengthen peace studies programs at their colleges or universities and this year's event will run June 11-15.

Since its inaugural event in 2009, the SI has hosted over 350 attendees from 105 different institutions—including 23 Catholic colleges and universities—across 6 continents on the University of Notre Dame campus in South Bend, Indiana. In addition, Kroc faculty have conducted modified programs like the SI in Uganda and are laying the groundwork for a training in Bogota, Colombia.

George A. Lopez, Rev. Theodore M. Hesburgh, C.S.C., Professor Emeritus of Peace Studies at Notre Dame and the founder of the SI, says the model builds on a long tradition of peace studies conferences, dating back to the early 1970’s. The Kroc Institute saw an opportunity to make a unique contribution to the academic pursuit of peace studies by training leaders from global colleges and universities.

“At Kroc, we were getting a lot of requests for our faculty to come to university campuses for two days and help departments learn more about peace studies,” said Lopez. “The requests and their diversity were outpacing our ability to fill them. The model we developed was to allow institutions who wanted to learn to come to our campus and hopefully to go home empowered with new knowledge and a curricular plan.”

The SI invites colleges and universities to send teams of three or more professors, administrators and researchers for an intensive learning experience. Attendees participate in plenary sessions in the morning and then work as a team on a previously identified project or challenge facing their own institution during afternoon sessions. Kroc faculty members meet with the teams to provide guidance and input when needed.

Asher Kaufman, John M. Regan Jr., Director of the Kroc Institute, says that the Summer Institute is a key part of Kroc’s commitment to elevating the field of peace studies.

“The Summer Institute is one of Kroc’s most important outreach programs,” says Kaufman. “It is part of Kroc’s strategy to take a leadership role in the field of peace studies by planting seeds for new academic programs and supporting the expansion of existing programs in the United States and around the globe.”

For the past four years, the event has been co-sponsored by the United States Institute of Peace (USIP) in Washington, D.C. According to Jeffrey W. Helsing, Associate Vice President for USIP's Academy for International Conflict Management, the SI was an attractive partner because it fit with USIP's mandate from congress to "enhance education in the U.S. about peace and conflict related issues," and it also provided an excellent opportunity for international educational institutions that were partnering with USIP to receive expert training.

"The SI is helping to regularize peace studies," says Helsing. "The key is that peace studies is not an academic outlier, but that it is in fact an area of study that has both academic rigor and also has a great deal of appeal to students and to young people. George's continued dedication to the SI and making it a vital part of the Kroc Institute's work has been key to its success."

Helsing says that the SI models trends seen across higher education, where not only are more peace studies programs springing up, but peace studies and conflict management curricula are being integrated with a wide variety of disciplines across the academy, including psychology, engineering, health care and more. 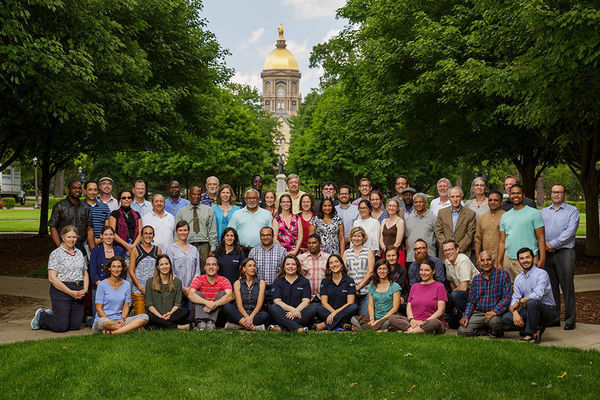 Participants at the 2016 Summer Institute.

Leaders from Lewis University, a Lasallian Catholic school in Romeoville, Illinois, first attended the SI in 2011 as part of developing a new peace studies minor on campus. Drawing on expert input from Kroc faculty, Christie Billups, Assistant Professor of Theology at Lewis, and James Burke, Associate Professor of Theology at Lewis and a 1972 Notre Dame graduate, launched an interdisciplinary peace studies minor in 2015. In its five semesters of existence, Lewis’s program, which spans 11 academic disciplines, has already graduated five peace studies minors and has grown to include 19 participants in the spring 2018 semester. Other interdisciplinary programs at Lewis have far fewer minors, some with only two or three students.

Burke says that Kroc’s expertise in both peace studies and Catholic social teaching provided resources to help the Lewis team craft a peace studies program that honored the college’s Lasallian tradition and was attractive to students from a variety of faith traditions.

“I suspected that the Summer Institute might provide us with a sort of immersion that would bring together cutting-edge peacebuilding theory with insights on how to involve many people in formation around Catholic social teaching,” says Burke. “When we came back to campus after the Institute, we were surprised by the synergy we found with other faculty and staff people [at Lewis] who are striving to create peacebuilding curricula and to see faculty as part of building a culture of peace on campus.”

Billups and Burke hope that the peace studies program will continue to grow, perhaps expanding to include a major and to engage campus-wide interest in interfaith dialogue. Since 2009, the university has sent four additional teams to the Summer Institute and is planning to send attendees again in 2018.

“The Institute is like refueling for us,” says Billups. “And we keep sending others because we’re only two people. We want to make sure that we’re planting seeds across the campus that will help this program to have the longevity and depth that it needs.”

At Valencia College in Orlando, the early development of the Peace and Justice Institute (PJI) on campus coincided with the very first SI in 2009.

“The Summer Institute opened our minds to the curricular side of our developing program,” said Rachel Allen, director of PJI. “George [Lopez] does a good job of helping schools think about aligning with the college’s strategic goals and finding support from all sectors of the college.”

PJI celebrated its tenth anniversary in January and has grown to include a Peace and Justice Studies curriculum; regular planning of co-curricular events exploring issues of peace, conflict resolution, and gender and racial justice; and programs for equipping government and community officials in Central Florida with tools for conflict mediation and dialogue. Allen says that the program now reaches over 30,000 people each year.

“We’re committed to building a culture of peace with staff, faculty, administrators, students and community members in Central Florida,” says Allen. She cites the Strategic Peacebuilding Wheel, a tool developed and taught by John Paul Lederach, Kroc Professor Emeritus of International Peacebuilding, as PJI’s inspiration to see each person they come into contact with as a potential peacebuilder. “No matter who you are, you have a place on this wheel,” she says.

And in November 2017, Lopez and Gerard F. Powers, employed parts of the SI teaching model at the Africa Institute for Peace and Justice Studies Program Development in the Catholic Social Tradition in Entebbe, Uganda. The event drew 64 people from 16 countries across Africa, Europe and North America, and resulted in the formation of an Africa Peace Studies Working Group, which will work under the umbrella of the Catholic Peacebuilding Network. The Working Group will spearhead networking and collaboration initiatives, such as faculty exchanges, curriculum development and joint research projects.

The SI’s curriculum continues to evolve to meet new needs.

Each year, roughly 20 percent of the SI’s curriculum is built to be responsive to the expressed needs and interests of the participants. Thus, recent SI’s have addressed themes similar to those covered at conferences in the early 1970’s, when the focus was on the Civil Rights movement and ending the Vietnam War. Recent SI programs aim to engage questions of domestic violence, community justice and local peacebuilding, as well as the dangers of nuclear war. Peace studies is “coming back full circle,” says Lopez.

As the SI’s tenth anniversary approaches, Lopez says he is thrilled that the program has grown and continues to draw leaders in the field of peace studies to Notre Dame’s campus each summer.

“I hope we at Kroc can continue to play a role in defining contemporary peace studies not just as one of the many forms of multi-disciplinary education within the academy. I’d like universities to understand the perspectives and skills in peace studies as the critical citizenship education of our era,” says Lopez. “Our domestic and global work are linked in so many ways, as we explore questions of violence, justice, immigration, refugee migration, trade, mass communication and the role of social media in peacebuilding.”

The Kroc Institute for International Peace Studies and its Summer Institute are part of the Keough School of Global Affairs at the University of Notre Dame.

Photos from the Summer Institute