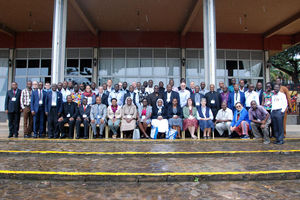 On November 7-9, the Africa Institute for Peace and Justice Studies Program Development in the Catholic Social Tradition took place in Entebbe, Uganda, hosted by Uganda Martyrs University. The Catholic Peacebuilding Network and the Kroc Institute were among 12 institutions that co-sponsored the Institute. The event was modeled after Kroc’s Summer Institute for Faculty in Peace Studies Program Development. It included 64 people from 16 countries, including Europe, North America and Africa, representing 18 institutions engaged in academic programming for peace and justice studies. Many of these institutions have either brand-new peace studies programs, such as the Higher Institute for Peace and Reconciliation at the Catholic University of Bukavu in the Democratic Republic of Congo, or ones still in only the planning stages, such as the Catholic University of South Sudan.

In the description of Dr. William Headley, C.S.Sp., adjunct professor of the practice with the Secretariat of the Catholic Peacebuilding Network at the Kroc Institute and professor at the Kroc School of Peace Studies at the University of San Diego, “By bringing together Catholic universities from across Africa to share peace studies learning and best practices, the Institute was the fruition of a seed planted by the two regional conference of AMECEA [Association of Member Episcopal Conferences of Eastern Africa] and ACEAC [Association of Episcopal Conferences of Central Africa] when they met in Bujumbura, 2010.” That meeting was the Conference of the Catholic Episcopate of the Great Lakes Region for Peace and Reconciliation, which approved a strategic plan for regional peace and reconciliation. Included in the plan were proposals for institutionalizing education, training, and research in peace studies and furthering collaboration among universities. Those goals were further developed in the Proposal for Research in Education for Peace, which was approved by the General Assembly of the Association of Catholic Universities and Higher Institutes of Africa and Madagascar in 2014, in Johannesburg.

In service to these plans, the Institute had four main objectives:

The Kroc Institute was represented by Caesar A. Montevecchio, Gerard Powers, and George A. Lopez, Rev. Theodore M. Hesburgh, C.S.C., Chair Emeritus in Peace Studies at the Kroc Institute, who was a featured speaker. Utilizing his experience with the Summer Institute, Lopez delivered a key plenary presentation in which he provided frameworks for the attending institutions to contextualize and plan their program development during the working sessions of the Institute. The Institute also included a speech by Archbishop John Baptist Odama, Chairperson of the Uganda Episcopal Conference and former Chairperson of the Acholi Religious Leaders Peace Initiative. Kroc Institute alumnus Fr. Elias Omondi Opongo, S.J., Director of the Hekima Institute of Peace Studies and International Relations, spoke in the Institute’s opening session giving a review of the African context of peacebuilding, outlining areas of progress and growth in democracy, economics, and human rights but also describing continued problem areas leading to conflict and injustice. And Fr. David Hollenbach, S.J., of Georgetown University’s Berkley Center, delivered a keynote address on “Catholic Social Teaching and Peace: Nonviolence, Justice, and Reconciliation.” Other sessions included speakers from Uganda, Democratic Republic of Congo, Cameroon, Côte d’Ivoire, Zambia, and South Sudan.

The Institute resulted in the formation of an Africa Peace Studies Working Group, which will work under the umbrella of the Catholic Peacebuilding Network. This Working Group will provide a leadership structure to ensure follow up to the Institute. The Working Group will spearhead networking and collaboration initiatives, such as faculty exchanges and joint research projects, and coordinate efforts to share best practices and strategies for curriculum development, student recruitment, enhancing engagement with the wider Catholic Church and governmental bodies, and other common concerns.