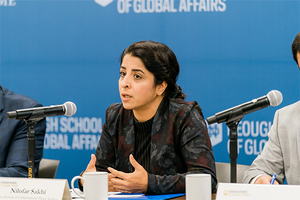 The international community should leverage the insights of everyday Afghans to design bottom-up approaches to aid and development and negotiate a political settlement that promotes government accountability.

That was the consensus among speakers at a recent panel discussion at the Keough School Washington Office.

The conversation comes at a critical juncture: People across Afghanistan are struggling with humanitarian and economic crises that have deepened following the United States’ 2021 withdrawal and the takeover of the Taliban government. They contend with high unemployment, widespread food insecurity, and gender discrimination.

“Our focus is particularly on the role of people and marginalized populations,” said Aref Dostyar, senior advisor for AfPAD. “Our goal is to learn what local people are already doing and how the international community can partner with them.”

Dostyar organized and moderated the panel, which included Jeffrey Grieco, president of the Afghan-American Chamber of Commerce; Nilab Mobarez, former president of the Afghanistan Red Crescent Society; Nilofar Sakhi, visiting research fellow with the Kroc Institute and senior fellow at the Atlantic Council; and Lisa Schirch, Richard G. Starmann, Sr. Professor of the Practice of Peace Studies at the Kroc Institute.

Speakers sketched a bleak portrait of the current situation.

“Afghanistan is now in the most complex emergency of any nation in the world, in my view,” Grieco said. “It involves a humanitarian and a food security crisis; a public health crisis; a governance crisis; a monetary, fiscal, capital liquidity, and banking crisis; and an internally displaced people and refugee crisis. All of it has happened simultaneously to the Afghan people, forcing more than 90 percent of the population into acute malnutrition and dramatically reduced purchasing power.”

Mobarez, who joined the discussion remotely from Kabul, underscored the plight of women and girls under the Taliban government. Women have been dismissed from jobs and face domestic violence at home, while girls suffer under a ban on secondary education. The combination has fueled nutrition and mental health issues and threatens the country’s future.

“We are in a very disastrous situation,” she said. “I am extremely worried for the women of my country.”

Speakers stressed the need to engage local communities in designing better approaches to aid and development.

“That model did not work very well as I’ve highlighted in my research because it did not boost people’s capacity to take the lead on development and humanitarian programs,” Sakhi said. “Especially in this particular time, a people-centric approach makes a lot of sense.”

Such an approach requires engaging the 75 percent of Afghans who live in rural areas, gathering input from local communities on the design of international programs, and engaging with civil society, NGOs, and university development experts, she said. In addition, the international community should avoid importing “cut-and-paste” models from other countries. It should recognize that each province has its own needs and should invest in local development centers, creating a sense of ownership.

Sakhi called for further dialogue to help promote the inclusion of women in development work and advocated better coordination among donor agencies to distribute aid.

Grieco outlined a four-point action plan to stabilize Afghanistan’s economy. It calls for:

Discussion also covered the importance of working toward a political settlement that gives voice to everyday Afghans.

Fawzia Koofi, an Afghan women’s rights activist and former member of parliament who attended the discussion, stressed the need for ongoing negotiations.

“I think it’s time, looking forward, for the world to use all its leverage before it loses it. We need a regional approach to make the Taliban accountable and to bring constitutional order,” Koofi said. “On a personal level, I feel humiliated and heartbroken when I hear all the stories about the suffering of my people when we have a chance to avoid this, and that is through a political settlement. When I lobby for a political settlement, it doesn’t show our weakness—please don’t regard it as a weakness. . . . I will never stop advocating for the people of Afghanistan.”

Mobarez said inclusivity was crucial to Afghanistan’s future, noting that the Taliban came to power because of a corrupt central government that excluded people. “Without a representative government, we will not see a better life,” she said. “No humanitarian organization can replace a legitimate government.”

Lisa Schirch of the Kroc Institute said the conversation was a welcome development as experts seek more effective solutions for Afghanistan.

“Too often the international community has talked about Afghanistan without allowing Afghans to lead their own way in a people-centered approach,” she said. “Our program at Notre Dame is committed to amplifying and focusing on Afghan voices, Afghan solutions, and Afghan leadership,” she said. “This is important as we consider the way forward in the short term with the humanitarian crisis; in the medium term, with development; and in the long term, with the work for a political settlement.”