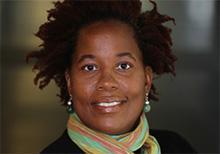 Karsonya (Kaye) Wise Whitehead is Associate Professor of Communication and African and African-American Studies at Loyola University Maryland and the host of "Today with Dr. Kaye" on WEAA 88.9 FM.

Kaye is an interdisciplinary scholar who researches the complex relationships between enslaved and freeborn 19th century black women and investigates how race, class and gender coalesce in American classrooms, political environments and social arenas. She holds a Ph.D. in language, literacy and culture from the University of Maryland.

Before beginning her academic career, Kaye worked for 10 years as a documentary filmmaker, earning three New York Emmy nominations and winning first prize in a competition sponsored by filmmaker Spike Lee. Her past films include, The George Washington Bridge: Crossing the Hudson, which chronicles the building of the bridge; Twin Towers: A History, which tells the story of the design, construction, and ultimate destruction of the 110-story buildings; and Life Lessons Learned in Last Place: The Zoe Koplowitz Story, which features a marathon runner with multiple sclerosis and diabetes and her 31-hour journey to complete the New York City Marathon.

Kaye also was an award-winning middle school teacher, having taught Advanced Academics Social Studies in Baltimore, Maryland. In 2006, she was named the Gilder Lehrman "Preserve America" Maryland History Teacher of the Year.

A native of Washington, D.C., Kaye came to the Kroc Institute to bolster her academic background in peace and justice issues.

"I believed in peace and considered myself an activist, but I wanted to understand the research on peace issues," Kaye says. "At Notre Dame I acquired not only a strong academic foundation, but also the encouragement to use my passion to focus on the issues that are important to me."

Kaye's passion and scholarly achievements recently led to two invitations to speak at the White House's Black History Month Panels. In 2013, she was one of four experts chosen to participate in the panel discussion "From Emancipation to Freedom" and in 2014 she was selected to moderate a discussion on African-Americans in the armed forces. In 2015, she also moderated a discussion on President Barack Obama's legacy in the black community.

"I have always been interested in doing my part to break down the walls of racism, classism and sexism," Kaye says. "Now I'm able to do it as a scholar and peace advocate."

Karsonya returned to Kroc in 2016 to receive the Distinguished Alumni Award.