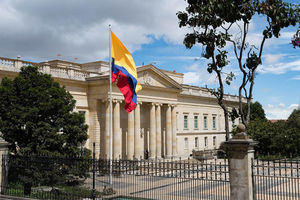 Isabella Cajiao Garcés remembers feeling a daily terror that her father would be kidnapped by Colombian guerrillas who targeted doctors for ransom money.

In the rural areas outside her home city of Pereira, the practice was so common that he carried a fake credential identifying him as a high school math teacher in case the guerrillas stopped him. When she was 8, it became so dangerous that the whole family moved to Spain for a few years.

“I grew up on that,” said Cajiao Garcés, who has never known anything other than the half-century conflict between the government, paramilitary units and the FARC guerrillas. “I don’t want my children to grow up in a country that’s in conflict. I don’t want them to feel they have to move because their life could be in danger.”

Cajiao Garcés graduated from Notre Dame in May with a master’s degree in international law and returned home to a very different country, one just setting out on a long road toward peace. She said she’s proud that the University played a part in achieving the peace agreement, as well as a central role in tracking the progress of implementing the peace plan. “Peace is a new start, and it’s changing our minds, changing our culture,” she said.

On Wednesday (May 31), peace was the centerpiece topic as the Alumni Club of Colombia hosted an International Hesburgh Lecture in the capital city of Bogota in conjunction with Pontifica Universidad Javeriana, one of the country’s most important Catholic universities.

Law professor Douglass Cassel spoke about his role on the legal team that hammered out the complex details of the 300-page agreement. Peacebuilding professor David Cortright spoke about how the Kroc Institute for International Peace Studies would employ its database of 34 previous plan implementations to verify that both sides are living up to their commitments.

“The peace accords that were signed last year and are currently being implemented are historic, Cassel said.

“There’s still some legal, political, logistical and economic hurdles to overcome, but it seems to me that the pathway to peace is now clear and irreversible.”

For 52 years, the Colombian government, paramilitary groups, drug cartels and guerrillas have fought at various levels of intensity. More than 200,000 people have been killed and more than 5 million civilians have been forced from their homes, among the largest number of internal displacements in the world.

When years of secret peace talks broke down in 2015, negotiators in Havana, Cuba, created a commission with three experts from each side. Colombian President Juan Manuel Santos tapped Cassel as a government representative for his long record and expertise in transitional justice. The six experts hammered out a broad agreement that was signed in Havana in late 2016. President Obama pledged to seek $450 million for Colombian peace efforts.

Colombian voters narrowly rejected the agreement in an October referendum, with many believing it was too lenient towards FARC leaders. Days later, Santos won the Nobel Peace Prize. He renegotiated the agreement and pushed it through his Congress two months later.

Cajiao Garcés said she did not know about Notre Dame’s involvement in Colombia when she chose the law school for her master’s degree.

“I didn’t have so much hope in the process at first,” she said. “But when I came here to Notre Dame and met Professor Cassel, I realized we’re not alone. There’s a lot of people involved who are very prepared, very professional, following this and making an effort to make it real and implement what was agreed.”

David Cortright said he and his Kroc colleagues were surprised when they received a call a couple days before the peace agreement was signed, informing them that they would be written into the accord to monitor implementation.

On the other hand, this work sits right in the Kroc’s wheelhouse. They maintain a Peace Accords Matrix (PAM), the largest database on peace agreements and implementation in the world. And Notre Dame professors like John Paul Lederach have been engaged in grassroots development and local peace work for three decades, even traveling to territories so remote they could only be reached by boat.

“Notre Dame has been in Colombia for a long time, contributing significantly to the peace process, to economic development, to human rights and justice issues,” Cortright said.

“We’ve gained the confidence of officials and institutions in Colombia, so we came to this place where we’re now at the center of the verification methodology.”

The PAM process starts by entering the provisions of the peace agreement into the database in ways that make the objectives measurable and comparable to other agreements. “Then we collect and analyze all the information possible on each one of those specific components”, he said, through a variety of sources and methods.

Automated technology gathers news articles from the more reliable sources in Colombia. Cooperation agreements in the accord guarantee that local governments, international organizations like the United Nations, think tanks and charitable organizations will provide their reports. Finally, Kroc’s mobile team in Colombia performs on-the-ground interviews and observations to verify this gathered information.

“We have a triangulation method to check two or three sources to make sure that information is verified,” Cortright said. “When we feel confident in that information, we put it in the database.”

The data from previous agreements allows for a qualitative and quantitative comparison. The Kroc’s primary partner in this effort is the Social Pastorate of the Catholic Archdiocese of Colombia, the social justice arm of the Catholic bishops. Cortright said this was a strategic choice because the Catholic Church commands wide respect in Colombia.

“Every town has a church, and there are parishes and dioceses everywhere,” Cortright said. “That gives us credibility and an established institution that has solid administrative procedures, but also a presence that is in every part of the country.”

The goal is to get a balanced picture of the peace implementation in a country steeped in competing political views, isolated areas and misinformation – all to verify a complex, contested and lengthy agreement.

“We understand that it’s controversial,” Cortright said. “We don’t have a stake in whose side is right or wrong. Our job is to monitor and see how well it’s being carried out according to the text of the agreement.”

So far, he said the pace of implementation process is on schedule or maybe slightly ahead of other peace accords Kroc has evaluated. The comparative data allows Kroc experts to make suggestions about options that other countries have tried in implementing their peace agreements. “We’re cautiously optimistic,” he said.

He also penned an op-ed for The Hill, an influential political newspaper in Washington, urging President Trump not to cut 44 percent from the main economic aid program that supports the peace implementation, as is called for in his administration’s 2018 foreign aid budget. Cortright wrote that economic development is the key to addressing poverty, the root cause of the long war, and eradicating coca crops.

Andrés López Latorre earned his doctoral degree in international human rights from the Notre Dame Law School in May. He said he wasn’t certain he would return home when he arrived four years ago, but now he’s deciding between offers of a Colombian academic job or as a prosecutor working with the peace process.

The Bogota native said he sees peace as “not a status but a process” that will take years of work. One of the challenges Colombians face, he said, is that the peace process didn’t bring people together, as the narrow failure of the referendum proved. Some people are ready to end the violence and move on, while others worry that FARC politicians could move the country in the direction of its neighbor Venezuela, which is mired in economic problems.

“I think development, human rights and peace are complementary and inter-dependent,” López Latorre said. “If we don’t have development or rights, there will be more reason for conflict. But if there’s no peace, we can’t have human rights or development either.”

Whichever job he chooses, his field will be justice for past crimes. Maybe academics can wait for a while.

“I have to go back,” he said. “This is the most important historical event of my generation.”

Produced by the Office of Public Affairs and Communications.