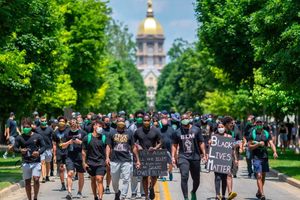 Members of the Notre Dame football team lead participants on a walk through campus in recognition of Juneteenth on June 19, 2020.

As Jason Springs watched Black Lives Matter protests sweep the United States in the summer of 2020, he felt an urgent need to adjust his fall semester class to academically engage the movement of the moment.

Many courses in peace studies focus on the study of historical social and political movements, and Springs thought that the protests provided a unique opportunity to study nonviolence in an explicitly relevant and present context.

“I wanted to design a full-fledged class to engage these current events in their immediacy and examine them comparatively with the Civil Rights movement,” said Springs, professor of religion, ethics, and peace studies at the University of Notre Dame’s Kroc Institute for International Peace Studies. “The focus of the class is on processes by which nonviolence intermingles with forms of more explicit struggle and tip into forms of violence for transforming a society to be more just.”

In Springs’ course, called Revolutionary Violence vs. Revolutionary Non-violence in the Black Lives Matter Uprisings of 2020, the class readings featured a combination of recent articles, editorials, and studies on the Black Lives Matter protests of 2020, as well as writings from Civil Rights activists that included James Baldwin and Stokely Carmichael.

Springs said that finding similarities and differences between the two movements is one of the fundamental goals at the heart of the course, and he wanted his students to understand the living legacies and voices of the 1960s.

His course also challenged the “romanticized appeal” of the Civil Rights movement, showing the realities of the nonviolent protests of twentieth-century America. Students analyzed sociological data on contemporary protests, which Springs says show a “[consistent, almost shocking]” trend of nonviolence.

“It’s a way to take political theory and peace studies concepts, and instead of having just an introductory understanding, you’re applying it to something super relevant and important,” said Francesca Masciopinto, a first-year student who took Springs’ class. “[We studied] Civil Rights, Martin Luther King Jr., Black Power, and political theory—and it’s so interesting to see these historical movements when we’re living through a historic moment.”

The course challenges students to look at issues that are affecting them and the country in which they live while engaging within the greater context of civil rights in America.

Springs said that the discussions surrounding nonviolence in both its practical and conceptual uses can sometimes be challenging in class because of students’ proximity to the topics of discussion.

“We have to be sensitive to student experiences while recognizing that we have to engage these things in their full gravity. It’s one thing to study the example of Emmett Till and the powerful impact that his family’s witness had, but when you talk about the murder of George Floyd, it’s a very live experience and issue.”

Springs hopes his students see that “we’re not in completely uncharted territory.” He wants to push back against the narrative that the Civil Rights movement of the 1960s was a perfectly peaceful movement, while studying its internal diversities and complexities.

He also hoped that his students would leave the class with an understanding of their place in the “living, evolving enterprise” of US democracy, and the ways in which democracy can be transformed through political nonviolent action to become more just.

“This is a really important class to have in the Notre Dame curriculum,” Masciopinto said. “It shows people’s commitment to addressing current issues and being able to face them and talk about them rather than pushing them under the rug.”

A longer version of this story was originally published at admissions.nd.edu on June 1, 2021.