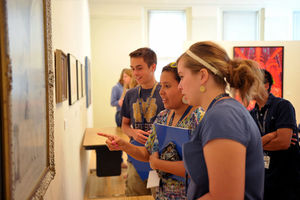 Eighteen rising high school seniors from around the United States and Puerto Rico who took part in Notre Dame’s two-week Summer Scholars program got a first-hand look at community-level peace and justice work in Chicago and in South Bend, the city that is the university’s home. Kroc Institute professors David Cortright and Patrick Mason team-taught the students in the peace studies academic track.

On Monday (June 27) they took the class to the Jane Addams Hull House Association in Chicago, which has worked with needy families since 1889. They also visited the University of Notre Dame’s Michigan Avenue campus, where they heard from a representative of the Interfaith Youth Core, which promotes religious cooperation and service among college students.

On Wednesday (June 29), Cortright and Mason led students to the Charles Martin Youth Center on South Bend’s west side. Gladys Muhammad, director of the center and associate director of the South Bend Heritage Foundation, welcomed students and gave them an overview of the civil rights and economic development challenges and progress in the neighborhood over the past few decades. South Bend Mayor Steve Luecke welcomed students to South Bend and encouraged them to get involved as peacebuilders in their communities now and when they are in college.

A community panel organized by Muhammad included Bobbie Woods, who started Mamas Against Violence Inc. after her 28-year-old son was shot down and killed in the neighborhood in 2003; Hardie Blake, a minister at Ardmore Church of Christ and the founder of Project Impact for inner-city youth; and Juan Escareno, a community organizer in Chicago, Detroit, and South Bend. Students also toured the Art and Social Justice exhibit at Colfax School and visited the South Bend Civil Rights Heritage Center at the Natatorium, where they heard from Indiana University Civil Rights Heritage Center director Kevin James and Indiana University trustee Alma Powell.

Summer Scholars is Notre Dame’s intensive 2-week pre-college program. Students choose 1 of 12 academic tracks, which range from acting to entrepreneurship to pre-law. Peace Studies was offered this year for the first time and proved to be a popular option.

"I liked being able to discuss international events in an academic setting," said Robert Frerich, a 17-year-old student from Minneapolis. "It was interesting to learn there are so many alternatives to violence when you're trying to solve a conflict."