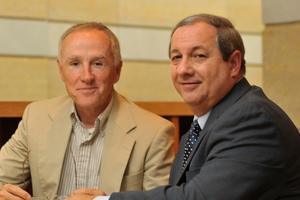 Tough new sanctions, which the United Nations Security Council is preparing to impose on North Korea as early as June 12 (Friday), are a necessary response to that country’s repeated defiance of nuclear nonproliferation agreements and its underground nuclear test on May 25, said Kroc sanctions experts David Cortright and George A. Lopez.

“These sanctions have significantly more teeth than previous measures,” Cortright said. “The tightening of banking sanctions and a complete arms embargo are critical to denying North Korea a potentially lucrative source of revenue and keeping weapons and dangerous materials out of the hands of other actors.”

The Security Council’s request that other states inspect North Korean ships on the high seas is unprecedented, the experts said. “Nothing like this has happened since 1962 when the U.S. imposed a sea quarantine to keep weapons materials out of Cuba,” Lopez said. “That quarantine was judged a major success, but it was imposed only by the U.S. These measures against North Korea have higher legitimacy because they are endorsed by the Security Council.”

The resolution is a rare sign of unity among the member states of the United Nation’s Security Council as well as Japan and South Korea, Cortright said. (The Security’s Council’s five permanent member states are China, Russia, the United States, Britain and France.) “The Pyongyang regime has never been more isolated. This action will send a powerful message that the North Koreans do not have the right to act alone in the world and violate international norms on weapons issues.”

Cortright, director of policy studies at Notre Dame’s Kroc Institute for International Peace Studies, and Lopez, the Hesburgh Chair of Peace Studies at the Kroc Institute, have spent a decade studying sanctions and consulting with the United Nations on sanctions implementation. Together they've written five books on sanctions and dozens of articles arguing that targeted economic sanctions can be an effective means of changing the behavior of rogue states without resorting to the use of force.

Cortright and Lopez's remarks may be used in whole or in part. The professors are available for interviews.