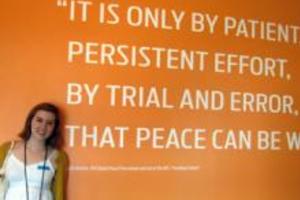 Claire Brosnihan and Nicholas Schilling were among 62 students from the United States and Canada invited to learn more about the social teachings of the Catholic Church, its work for peace around the world, and the diplomatic activities of the Holy See Mission to the U.N. (The Holy See is the diplomatic term for the Vatican.)

Students met with Archbishop Francis Chullikatt, Permanent Observer of the Holy See to the U.N. and president of the Path to Peace Foundation; Ambassador James Nicholson, who served as U.S. ambassador to the Holy See from 2001-2005; and other U.N. ambassadors and senior officials. They also met with Gerard Powers, director of Catholic peacebuilding studies at the Kroc Institute, who participated in a panel on Catholic peacebuilding.

“I learned just how much the Catholic Church participates in world affairs – everything from nuclear proliferation to the Israeli-Palestinan conflict to immigration and refugee issues,” said Brosnihan, a political science and peace studies major.

“I did a lot of thinking about what it means to be American and Catholic and to participate in international politics,” said Schilling, a political science major with minors in peace studies and international development studies.