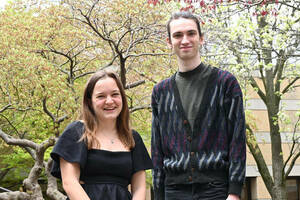 University of Notre Dame seniors Duncan Donahue and Madeline Ward have been named the recipients of the 2022 Yarrow Award in Peace Studies. The award is given annually by the Kroc Institute for International Peace Studies to an undergraduate student or students who demonstrate academic excellence and commitment to service in peace and justice.

“The selection committee was amazed by the incredible quality of this year's graduating class, and we were excited to select two Yarrow Award winners,” said Laura Miller-Graff, director of undergraduate studies and associate professor of psychology and peace studies. “Each of these students, according to their own interests and areas of speciality, have given serious thought to how peace studies integrates and enlivens their current and future work.”

Duncan Donahue, originally from both South Bend, Indiana, and Midland, Michigan, knew that he was interested in studying peace before he arrived at the University of Notre Dame. Through family connections, he had a conversation with Kroc Institute faculty member Ann Mische, associate professor of sociology and peace studies, and their conversation convinced him that peace studies was “exactly what I wanted to study in college.”

During his time on campus, Donahue served as an ambassador for the Undergraduate Program in Peace Studies and was also involved in a various forms of  student activism, including helping to organize the Student Strike for Black Lives in 2020 and the 2019 student climate strike, and as a member of Solidarity ND, the first explicitly socialist organization in Notre Dame history. He also served as national movement trainer and South Bend Hub coordinator for the Sunrise Movement, a youth-led movement to address climate change.

“Duncan's academic and scholarly work during his time at the Kroc Institute has been impressive, including both his classroom engagement and presentation and a summative presentation of his academic work at this year's Student Peace Conference,” said Miller-Graff. “In addition to this, Duncan has been an active participant in the Kroc community and an energetic ambassador for our program.”

Following graduation, Donahue will spend the summer working in Ann Arbor, Michigan, as a field organizer with Clean Water Action. In the fall, he’ll travel to Austria to serve as an English teaching assistant for one year.

“Peace studies has given me the lenses, the tools, and the knowledge to serve as a foundation for living the life I want to live and to impact social change,” said Donahue. “I feel very equipped to go out and have a field organizer job. Not only do I feel that I know what I’m doing from a skill perspective, but I have a big picture view of where my day-to-day work will fit into my values.”

Madeline Ward, from Jacksonville, Florida, took the “Introduction to Peace Studies” class during her freshman year upon the recommendation of her Resident Assistant. Although the class didn’t immediately lead her to declare a major, she returned to peace studies her junior year when she took a class taught by Visiting Faculty Member Justin de Leon focused on social movements and indigenous communities. She was struck by what she called “deeply honest conversations about the reality of the world,” and immediately reached out to Anna Van Overberghe, assistant director for academic administration and undergraduate studies at the Kroc Institute, to declare a peace studies minor.

During her time at Notre Dame, Ward served as both co-chair and chair of dorm liaisons with the ND Votes Task Force and participated in Social Concerns Seminars and the Summer Service Learning Program with the Center for Social Concerns on campus. She also worked as a research assistant for the Peace Accords Matrix project at the Kroc Institute during her first year, and volunteered or interned with local community organizations including La Casa de Amistad and the Exoneration Justice Clinic.

“Madeline has an impressive record of diverse forms of engagement in peace studies across the domains of research and practice,” said Miller Graff. “In addition to her impressive scholarly record, she has taken her learning outside of the classroom to contribute to community institutions.”

In July, Ward will be moving to Nazareth Farm in Salem, West Virginia, where she will join several recent peace studies graduates as part of a Catholic community that is committed to service through providing home repair alongside intentional spiritual practices.

“Peace studies has given me the perspective and language I need to be able to talk about the things that I’m passionate about and the things that I want to do,” said Ward. “Combined with my education in Catholic social teaching, it’s given me the confidence to be going into service after graduation, and to realize that service is a really important way to continue your education and learn about the world.”