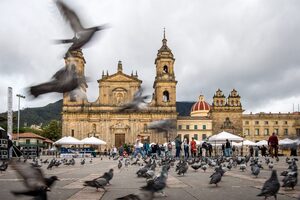 “Allow me to tell you, from my own experience,” said Juan Manuel Santos, delivering the 2016 Nobel Peace Prize Lecture as the president of Colombia, “that it is much harder to make peace than to wage war.”

The mistaken notion Santos alluded to ­— that peace comes easily — is a common one, Josefina Echavarría Alvarez says.

“Consider the war in Ukraine or other areas of conflict around the world,” explains Echavarría, a professor at Notre Dame’s Kroc Institute for International Peace Studies. “We hope the fighting ends. But that is only the first step. We also need to begin the complex work of healing, creating justice and cultivating the conditions for genuine human flourishing. Without these, the violence will return.”

Echavarría, an expert on peace agreements, speaks not just from her own experience but also from the collective experience represented in the Peace Accords Matrix (PAM), which she directs at Kroc. The matrix, which Santos cited by name from the Nobel podium as a resource for the path to peace in his country, tracks dozens of peace agreements around the world and collects data on the successes and failures of each agreement.

To explain what PAM tells us about peace building, however, Echavarría speaks first not about its data but about its story — and the story of its founder, John Darby.

Born in 1940 in Belfast, Northern Ireland, Darby initially taught history. But in the 1970s he began studying the present — namely The Troubles, the bloody conflict between Unionists and Nationalists that punctuated more than three decades of life in the region.

Darby followed not just the conflict but also what he called the “long, cold peace” that emerged in fits and starts. He tracked the seven separate peace agreements that had gained some traction but failed to put a lasting end to the conflict. And he looked abroad for inspiration.

At the time, there was little agreement about what a peace process ought to look like. Many vociferous detractors, including the Unionist politician Ian Paisley, went so far as to claim there was “no such thing as a peace process.” But at the Centre for the Study of Conflict which he helped found at Ulster University, Darby realized that while the conflict in Northern Ireland might look different from conflicts in Nicaragua or Namibia or Nepal, the peace agreements in each case had similar structures that could be tracked and compared.

A recipe for peace building began to emerge, one that involved active ingredients like good-faith negotiations, the inclusion of key actors and the commitment to sustain a long process without resorting to violence again.

After the Good Friday Agreement of 1998 proved successful in delivering lasting peace to Northern Ireland, Darby brought his expertise to the Kroc Institute. He died in 2012 but had lived long enough to see his ideas develop into the Peace Accords Matrix.

The matrix would soon become a tool not just for analyzing peace agreements but for making them — and even for implementing them. Santos, who was elected president of Colombia in 2010, soon began using it in his efforts to build peace with the FARC, a guerrilla group whose decadeslong war with the Colombian government was then the longest-running conflict in the Western Hemisphere.

When the Colombian Peace Accord was finally signed in 2016, Santos tasked Kroc with monitoring and verifying its implementation. More than a cookbook, PAM was now a barometer. Today it tracks the status of all 578 stipulations in the accord. It reports progress and identifies areas that need attention lest they derail the peace process.

These days Echavarría’s efforts as PAM director involve finding new ways to support the peace process in Colombia while incorporating the lessons learned there into the institute’s work. In August, Kroc agreed to host in perpetuity the digital archive of testimonies collected by Colombia’s Truth Commission in fulfillment of a provision of the accord. With a few clicks, anyone around the world may now freely access tens of thousands of stories, complete with videos, audio recordings, artworks and photos.

The archive opens a digital window into the lives of those affected by the conflict, which suddenly becomes something more than a mere historical event. It becomes the stories of Raúl, a young man whose leg was amputated after he stepped on a landmine; of Diana, who attempted suicide after witnessing her mother’s murder by a paramilitary group; of Olga María, whose family disintegrated after she lost her father when she was 6.

For Echavarría, sharing stories like these is not just another element but an emblem of the whole peace process, and it speaks to the larger lesson that runs from Darby’s early work to the creation of PAM to its many uses today.

“When there is a long, violent conflict, often the victims feel they have their dignity taken from them,” she says. “What we hope to do — what the peace process has to do — is recognize their humanity and place the victims, rather than the perpetrators or militaries or political leaders, back at the center. The victims are the protagonists. This shift in perspective is crucial for making lasting peace.”

Brett Beasley is a writer and editorial program manager for Notre Dame Research.

This story was originally published in the winter edition of Notre Dame Magazine.