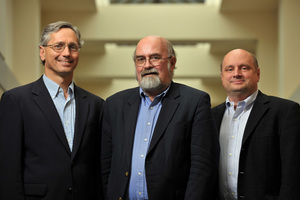 The Catholic Church has a rich body of teaching on the ethics of war that has been influential for centuries around the world. Peace also plays an important role in Catholic teaching, yet the concept of peacebuilding is far less developed than the well-known “just war” theory.

The book seeks to contribute to a “conceptually coherent, theologically accurate, spiritually enlivening, and practically effective approach to Catholic peacebuilding,” says Appleby, director of Notre Dame’s Kroc Institute for International Peace Studies, “one that complements Catholic teaching on the ethics of war.”

Peacebuilding covers a range of topics, including Catholic peacebuilding in Colombia, the Philippines, the Great Lakes Region of Africa, Indonesia, and South Africa. It also highlights the relationship among peacebuilding and Catholic social teaching, interreligious dialogue, Christology, pastoral theology, and ritual.

“This is a uniquely powerful and important book,” writes J. Bryan Hehir of Harvard University’s Kennedy School of Government. “Its relevance begins with the Catholic community, but it reaches beyond the church to other religious traditions to the role of states and international institutions and — most powerfully — to the lives of those seeking to build the structures of peace in conflicted communities throughout the world.”

“This much-needed contribution provides a well developed theology, ethics and spirituality that will serve as a firm foundation for effective peacebuilding programmes,” writes Lesley-Anne Knight, Secretary General of Caritas Internationalis. “It will be of value not only for Caritas and other Church agencies, but for people of goodwill around the world who, with compassion and respect for the dignity of every individual person, recognise that we are all one humanity.”

The book is the product of an intensive four-year research project sponsored by the Catholic Peacebuilding Network in collaboration with the University of Notre Dame’s Kroc Institute for International Peace Studies and the Bernardin Center for Theology and Ministry at the Catholic Theological Union in Chicago.