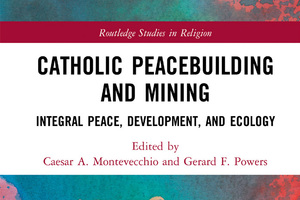 From cellphones to computers to life-saving medical technologies, the day-to-day lives of people across the globe are intertwined with materials produced by the global mining industry. A new book by the Catholic Peacebuilding Network (CPN) makes the case that the Catholic community can make a distinctive contribution by addressing mining issues through the lens of peacebuilding. Considerable work has been done on mining and development ethics, environmental ethics and corporate social responsibility, but little has been done to integrate this work, relate it to the practices of the Catholic community in conflict zones, and consider it from a Catholic peacebuilding perspective.

The book, “Catholic Peacebuilding and Mining: Integral Peace, Development, and Ecology” (Routledge), is co-edited by Caesar Montevecchio, CPN assistant director, and Gerard Powers, director of Catholic peacebuilding studies and CPN coordinator, and grows out of a series of conversations convened by CPN in response to concerns from CPN partners around the world about the ways mining is driving conflict in their local contexts.

“Most people are passingly aware of conflict mineral issues, the literal fighting over control of resources and the ways that mining can be used to fund militants and insurgents,” said Montevecchio. “But that’s really only one piece of the issue. Mining touches issues of Indigenous rights, land ownership, pollution and environmental degradation and international development.”

Montevecchio also notes that a Catholic peacebuilding perspective on mining is relevant because the Church is one of the few institutions in the world that has the kind of vertical and horizontal reach that can parallel and match what the mining industry has. The challenge, as he and Powers spell out in the book’s introduction, is to translate “the capacity for an integrated approach into actual collaboration among diverse church actors at different levels.”

The book includes chapters that approach the question of mining and peacebuilding from perspectives including Catholic social teaching, development theory, economics, corporate social responsibility and theology. It also contains case studies of mining, its impact and grassroots responses to it in contexts including Colombia, El Salvador, the Democratic Republic of the Congo, the Philippines and Peru.

In his chapter in the book, Cardinal Peter K.A. Turkson, former prefect of the Holy See’s Dicastery for Promoting Integral Human Development, looks at the relationship between mining and peacebuilding through the lens of Christian scripture, using the Bible to establish a moral foundation for assessing mining and the mining industry.

“The symbolic use of precious metal in the Scriptures ascribes to the metal a character and a value which transcend its earthly value and usage, namely, as mere source and instrument of wealth,” writes Turkson. “Can the industry that seeks with such skills and dexterity to possess these precious metals be guided by some other objective and vision, besides that of possession or having wealth on earth?”

Ray Offenheiser, the William J. Pulte Director of Notre Dame’s Pulte Institute for Global Development, writes on the need for mining companies to move from operating with impunity to negotiating and receiving consent from local communities. Offenheiser has played a major role in addressing issues at the intersection of mining and development, including serving as president of Oxfam America for more than 20 years.

“Mining companies now realize that achieving a sustainable social license to operate is critical and will require a far greater commitment to engaging a wide range of local and global stakeholders, and is far more involved than a vague one-off exercise at the start of a project,” said Offenheiser. “It will involve a serious commitment to building trust and a shared sense of purpose with local communities about the long-term well-being and prosperity of a region.  Companies with an eye toward investing over a 30-to-50-year period must recognize that they have to move beyond being a traditional ‘extractive industry’ toward becoming a reliable ‘development partner.’”

Father Rigobert Minani, S.J., head of research for the Peace, Human Rights, Democracy and Good Governance Department at the Centre d’Etude Pour l’Action Sociale in the DRC and team leader for the Ecclesial Network of the Congo Basin Forest, explores the particular role of the church in addressing conflicts arising from mining in the DRC. The DRC is one of the world’s largest sources of cobalt and coltan, two minerals in high demand in Silicon Valley.

“Minerals are the fuel of war in the DRC today, and good [resource] management could favor peacebuilding in the DRC,” said Father Minani, who also noted that the Catholic Church in the DRC has created a special episcopal commission to monitor the governance of natural resources and educate local communities on the intersection of mining and peacebuilding.

Another chapter focuses on the Catholic approach to extractives in Colombia. Sandra Polanía-Reyes, associate professor of economics at the University of Navarra in Spain, and Monseñor Héctor Fabio Henao, director of Caritas Colombia, address mining in the context of a resource-rich country where mining is seen by some as the best way to deliver a peace dividend after decades of conflict.

“Unless human rights are promoted and protected as they should, and there is a transparent agreement on how extractives should be managed, the peace process implementation won’t succeed,” said Polanía-Reyes.

In Colombia, the Catholic Church has accompanied those most impacted by ongoing conflicts, including ex-combatants, internally displaced people, immigrants from Venezuela and lower-income communities. Polanía-Reyes notes that this accompaniment has made it possible to “gather micro-level data that allows policymakers, advocates and academics to present the challenges as they truly are and propose effective solutions” that will hopefully be relevant in contexts beyond Colombia as well.

Overall, CPN hopes that this book will add visibility to the ways mining, and the consumer behaviors that drive it, is fueling conflict around the world and empower people to take action in their own contexts. The editors also hope to illustrate pathways the Church can support to better foster responses that integrate the many different dynamics at play across this issue.

Laurie Johnston, associate professor of theology and religious studies at Emmanuel College in Boston, wrote the book’s conclusion and hopes that a careful reading of it will help people to see the way this issue is not only global, but personal.

“I’m talking to you right now on a phone that probably contains coltan from Congo, possibly mined by children,” said Johnston. “We all have intimate connections with this injustice. Laudato Si’ is helping us realize that we can’t tackle climate change in isolation from human rights, and you can’t address war and work for peace without attending to environmental factors. We need an ecological just peace.”

The Secretariat of CPN is housed at the University of Notre Dame’s Kroc Institute for International Peace Studies, part of the Keough School of Global Affairs.

Join authors of the book for a virtual launch on Tuesday, February 22. Learn more >>>