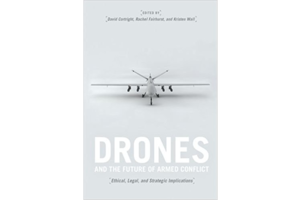 Over the past decade, the number of weaponized drone systems in the United States has multiplied from 50 in 2001 to more than 8,000 in 2013.

A new book edited by David Cortright, director of policy studies at Notre Dame’s Kroc Institute for International Peace Studies, shows current uses of these weapons to be ethically and legally questionable and strategically unwise.

Drones and the Future of Armed Conflict (University of Chicago Press) offers new insights on the impacts of drone warfare from leading ethical, legal and strategic scholars. Co-edited by Rachel Fairhurst and Kristen Wall, the book includes contributions from a U.N. special rapporteur, military and legal scholars, political scientists, security experts and an investigative journalist.

Drones, or unmanned aerial vehicles, enable states to engage in military operations without incurring casualties among their own forces, and they are more accurate than conventional bombing. But the use of combat drones has led to civilian deaths, and some scholars question whether it increases the propensity of political leaders to use force.

A recent Pew poll showed that most Americans continue to support the use of drones to eliminate extremist groups such as al-Qaeda, although opposition to such use has increased.

"Combat drone usage has not proven to be an effective counterterrorism tactic," Cortright said. “Drone strikes in Pakistan, Afghanistan and Yemen have not reduced extremist violence and they’ve deepened animosities against the United States.”

“Drones and the Future of Armed Conflict is a welcome addition to the growing literature on drone warfare, bringing together specialists on strategy, human rights, ethics, and law to discuss the implications of drone use for each of these areas,” said Sarah Kreps, associate professor of government at Cornell University. “ [The book makes] … a forceful and convincing case for why drones or a militarized strategy more generally should not be central to our counterterrorism policy.”

The Kroc Institute for International Peace Studies conducts research on strategies for sustainable peace and supports undergraduate, master’s, and Ph.D. students in peace studies. It is an integral part of Notre Dame’s new Keough School of Global Affairs.