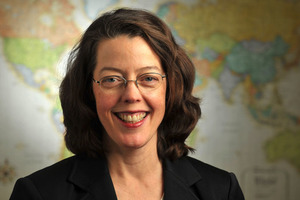 Mary Ellen O’Connell will deliver the fifth annual Justice Stephen Breyer Lecture on International Law on April 5 at the Brookings Institution in Washington, D.C. O’Connell is the Robert & Marion Short Professor of Law and Research Professor of International Dispute Resolution, Kroc Institute for International Peace Studies, at the University of Notre Dame.

O’Connell will address the legality of using fully autonomous weapons and her lecture will launch a round-table discussion among ethicists, military strategists, policy experts and scientists on this area of developing technology. Currently, rapid scientific advances are outpacing the public debate and the law and ethics needed to regulate this next generation of lethal robots are lagging behind.

“As much as any invention, autonomous weapons challenge humanity’s legal, moral, and security concepts,” O’Connell said. “It will be a privilege as well as a responsibility to set the terms of a discussion among such eminently qualified people.”

O’Connell was invited by the Brookings Institution’s Foreign Policy program, in partnership with The Hague Municipality and the Embassy of the Netherlands in Washington. Previous lecturers in the series include Harold Hongju Koh, Sterling Professor of International Law and former Dean, Yale Law School; John Carlin, former Assistant Attorney General in the Department of Justice’s National Security Division; and Stephen Breyer, Associate Justice of the United States Supreme Court.

In her lecture, O’Connell will suggest a way to advance the discussions in Geneva, where the Holy See is one of the leading critical voices.

“There seems to be consensus that lethal autonomous weapons are something truly new and that we can’t go as far as the technology indicates we could go,” said O’Connell. “I want to emphasize that some form of meaningful human control is the common ground. It raises the notion that there is something we need to control about weapons, which is a different issue than we saw in the unmanned weapons debate.”

O’Connell also hopes to invite all participants to examine the assumptions driving the development of new autonomous weapon technologies.

“The research that goes into building this next generation of high tech weapons is based on the assumption that we will need these weapons and that we will have a purpose to deploy them in the future, and that seems to be an unexamined assumption. If we could foresee a world in which high levels of military violence are not the reality, we could shift resources into life-affirming technologies that are certainly in America’s national interests,” said O’Connell. “I want us to ask about the assumptions we are making and whether they are the right ones.”

O’Connell’s address will be broadcast live and a panel discussion will follow immediately afterward. Panel participants include Jeroen van den Hoven, professor of ethics and technology at Delft University of Technology in The Netherlands, and Maj. Gen. Charles J. Dunlap, USAF (Ret.), professor of the practice of law and executive director of the Center on Law, Ethics and National Security at Duke University’s School of Law. Mayor Pauline Krikke of The Hague will offer opening remarks and Ted Piccone, senior fellow in the Foreign Policy program at Brookings, will moderate the panel discussion.

More information on past lectures in this series can be found at the Brookings website.

Adapted from a press release by Amanda Gray, Notre Dame Law School, and the Brookings Institution.