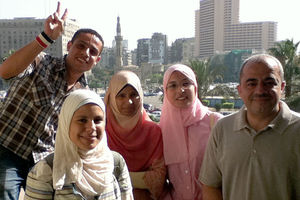 In early 2011, the whole world watched as millions of Egyptians staged a largely peaceful revolt that brought down the dictatorship of Hosni Mubarak. "This truly was a mass revolution," says professor David Cortright, an expert in nonviolent movements and social change, "and one of the largest outpourings of mass civil resistance in human history."

In June, Cortright, director of policy studies at Notre Dame's Kroc Institute for International Peace Studies, and Emad Shahin, an Egyptian political scientist and the Luce Professor of Religion, Conflict and Peacebuilding at the Kroc Institute, organized a symposium at Cairo University on "Learning Lessons from the Unarmed Revolution in Egypt." They aimed to capture the historical narrative and chronology of what happened in Egypt while it is still fresh in the minds of participants and close observers and to begin to assess the implications of these events for the future of nonviolent resistance.

Sponsored by the Kroc Institute and the International Center on Nonviolent Conflict, the symposium included meetings at Cairo University with student revolutionaries, professors, and others involved in the events.

At a follow-up meeting for faculty and staff at the Kroc Institute, Cortright explained how the protestors showed a rigorous commitment to avoiding violence, even setting up checkpoints to make sure no one brought weapons into Tahrir Square. Their tactics included the forming of human chains, the chanting of "peaceful, peaceful," and the use of Facebook and social media to organize.

The police attacks on protestors that began on January 25 were massive and brutal, Cortright said, involving rubber bullets, live ammunition, and teargas. According to figures provided by a government adviser, 850 people were killed and 9,000 injured over the course of several days. "It was an epic battle requiring tremendous sacrifice," Cortright said.

"This was not a purely nonviolent revolution in the manner Gandhi would have espoused," Cortright said. "Yet the protestors were overwhelmingly peaceful and consciously avoided the use of weapons. They wanted to maintain the high moral ground, and they knew instinctively that the use of arms would not attract the support of the Egyptian people and would produce certain political defeat."

The direction of the current political transition is uncertain, but the Egyptian people are clear in wanting to decide their future on their own, without foreign interference, said Cortright. No matter what the outcome of the upcoming elections, "the revolution and the rise of the Facebook generation have fundamentally changed expectations in the region," he said, "especially among young people and women, who had no political power previously."

Seven or eight books already have been written (and published in Arabic) on the revolution, Cortright said. He and Shahin plan to continue their study of the movements, incorporate the lessons in their classroom teaching, and possibly co-author a book on the topic.

David Cortright is the author or editor of 17 books, including Gandhi and Beyond, Peace: A History of Movements and Ideas, and, most recently Ending Obama's War: Responsible Military Withdrawal in Afghanistan. Cortright blogs at davidcortright.net.  Emad Shahin is an editor, most recently, of Struggling Over Democracy in the Middle East and North Africa and is editor in chief of the Oxford Encyclopedia of Islam and Politics.