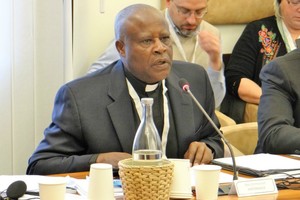 For Emmanuel Katongole, Professor of Theology and Peace Studies at the University of Notre Dame’s Kroc Institute for International Peace Studies, nonviolence lies at the heart of what it means to be a Christian.

“As Christians, we are committed to nonviolence not because it works (and more scholars are showing that it does), but because it’s the way that God creates, governs, provides for, and redeems the earth,” said Katongole.

Given this commitment, Katongole was energized by his participation in an April 4-5 meeting at the Vatican focused on laying a theological, ethical, and pastoral foundation for a possible encyclical revising the Catholic church’s position on Just War and nonviolence. The conference, co-hosted by Pax Christi International and the Vatican's Dicastery for Promoting Integral Human Development, brought together 80 scholars, theologians, bishops, activists, and leaders for a robust conversation on the power of nonviolence for affecting social change.

The gathering followed a 2016 conference and three years of work by a global team, including Katongole, to produce a several hundred page document of scholarship on nonviolence entitled, “Advancing Nonviolence and Integral Peace in the Church and World: Biblical, Theological, Ethical, Pastoral and Strategic Dimensions of Nonviolence.”

Many attendees, including Katongole, are hopeful that the groundwork laid in these conferences and the working document will provide the basis for an encyclical from Pope Francis.

“An encyclical would set the tone for the Christian church and illustrate that nonviolence is at the heart of the gospel and connected to all dimensions of the church,” said Katongole. “In a way right now, the whole universe is being saturated with an economy of violence. An encyclical would set a tone and free our imagination to see the ways that we can work toward peace and would add new energy to the conversation about reducing violence.”

Encyclical or no, many of those gathered at the Vatican in April will continue to converse and work to engage nonviolent social change strategies around the world.

“We need to be continually working to mobilize new conversations,” said Katongole. “We don’t want the conversation about nonviolence and social change to live only in Rome.”

The University of Notre Dame’s Kroc Institute for International Peace Studies, part of the Keough School of Global Affairs, is one of the world’s leading centers for the study of the causes of violent conflict and strategies for sustainable peace.