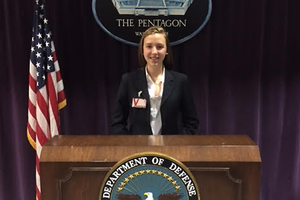 Rising senior Bridget Rickard, a Philosophy and Peace Studies major with a minor in the Catholic Social Tradition, has just concluded a trifecta of internships.

Funded by a CUSE grant and support from the Career Center and arranged by the Kroc Institute, Rickard in June 2016 headed to New York City to work with the United Nations office of Caritas Internationalis, the Vatican-based confederation of more than 160 Catholic relief, development, and social service organizations. Her duties included researching and drafting policy memos, planning schedules for visiting delegations, attending daily briefings and ministerial meetings, and helping organize events with UN Member States and partner organizations. Given the role of Caritas Internationalis at the UN and its connection to the Vatican, Rickard was able to observe firsthand how those affiliations worked. That experience, she said, “deepened my understanding of and appreciation for Catholic approaches to international affairs.”

The Bureau of International Organizations at the U.S. Department of State in Washington D.C. was Rickard’s next stop. Sponsored by the Rooney Center for the Study of American Democracy, her September to December 2016 internship was with the Office of Economic Development and Assistance, where she researched and drafted policy memos for several resolutions during the UN’s General Assembly. Those experiences, she said, enabled her “to develop a more nuanced understanding of U.S. bilateral and multilateral efforts to advance freedom, promote peace, and support prosperity.” 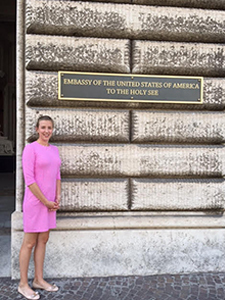 Rickard’s D.C. internship also sparked her interest in the U.S. Foreign Service. With funding from the Nanovic Institute for European Studies, she landed a summer internship in Rome at the U.S. Embassy to the Holy See. Her work included drafting cables, briefing books, and policy memos, duties that fostered valuable insight into career choices as well as a new perspective on the Catholic Church; Rickard decided against a U.S. Foreign Service career right now, and she came to recognize the multifaceted political role occupied by the Catholic Church.

In assessing her three internships and their connection to her coursework at Notre Dame, Rickard said, “In studying Catholic tradition and classical texts in the full range of social spheres—economic, political, cultural, religious, and familial—I have refined my vision of the good society. This vision has been further supplemented by my coursework in Peace Studies, which has allowed me to engage systematically with the concepts of strategic peacebuilding, multi-stakeholder engagement, interreligious and interethnic dialogue, conflict resolution and transformation, and post-conflict reconciliation.”

Professor Gerard Powers, Director of Catholic Peacebuilding Studies at the Kroc Institute, added: "Bridget's three internships, as well as her work as a research assistant for the Catholic Peacebuilding Network, have given her an inside look at relationships between the Vatican, U.S., and the U.N., unmatched even by most specialists in the field. All of this is a testament to her initiative, her commitment to peace, and her unusual level of professionalism."