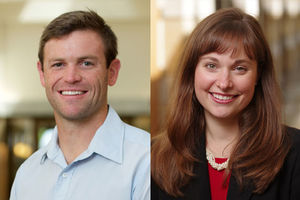 Ukraine is on the brink of war-related environmental disaster according to new research published by two Kroc Institute doctoral students. Kristina Hook and Richard Marcantonio, both doctoral candidates in anthropology and peace studies, published their research in the Bulletin of the Atomic Scientists on October 16.

Hook and Marcantonio’s research suggests that eastern Ukraine, an area now facing its fifth year of war, has “heightened potential for a severe ecological disaster.” The war in eastern Ukraine has left two million people displaced, 11,000 individuals confirmed dead, and has led to widespread environmental destruction affecting air, soil and water quality. Perhaps most urgent is the flooding of inter-connected landmines across the contact line separating the Ukrainian government controlled side and an area controlled by Russian-supported separatists. The flooding opens the door to the possibility of water poisoning and the spread of radioactive contamination.

Hook and Marcantonio drew on scientific data from the Ukrainian Ministry of Ecology and Natural Resources, as well as interviews with academics, government officials, journalists and other key individuals, to paint the picture of the rapidly deteriorating conditions in the “Donbas[1]” region.

“It is in the interest of the Ukrainian government, the Russian-backed separatists, and the Russian government to begin to confront the strategic implications of this environmental disaster, which is likely to spread across the Ukrainian-Russian national boundary,” they write.

George Lopez, Rev. Theodore M. Hesburgh, C.S.C., Professor Emeritus of Peace Studies and Chair of the Bulletin’s Board of Directors from 1998-2003, emphasized the importance of Hook and Marcantonio’s research being published at this time and in this particular outlet.

“For the past decade, The Bulletin of the Atomic Scientists has led policy journals in publishing groundbreaking research on the dangers of climate change, as well as its relationship to violent conflict,” said Lopez. “In their important article, Hook and Marcantonio help to advance understandings of the complex, interactive nature of environmental decay, governmental mismanagement, and violent conflict.”

Hook has been conducting field research in Ukraine for the past year examining examine the causes and legacy of the 1930s Holodomor mass atrocities.

“We're glad that the Bulletin is highlighting this topic through our work, as this environmental crisis is an under-studied issue in an under-reported war between Ukraine and Russian-backed separatists,” she said. “…The accumulating environmental risks may leave a legacy of human devastation lasting well beyond the still-unforeseen end of active warfare.”

Marcantonio’s research focuses on the global interplay between conflict and climate change, and he sees the Bulletin of the Atomic Scientists as an important venue for publishing this research, especially given the journal’s management of the Doomsday clock which tracks the likelihood of “human-made global catastrophes.”

“Other than the threat of nuclear weapons, climate change and other forms of environmental degradation—exactly the type of global impacts we highlight in the article—are the primary driver moving the clock toward doom. By publishing our work here, we are directly informing the Doomsday clock which, for a large readership, serves as a key indicator of concern and direction.”

Hook and Marcantonio are both doctoral affiliates of the Kellogg Institute for International Studies, as well.

About the Kroc Institute:

The University of Notre Dame's Kroc Institute for International Peace Studies, part of the Keough School of Global Affairs, is one of the world's leading centers for the study of the causes of violent conflict and strategies for sustainable peace. The Kroc Institute’s dual degree Ph.D. program allows students to pursue a degree in peace studies and one of six other disciplines: anthropology, history, political science, psychology, sociology, or theology.

[1] The region including the Luhansk and Donetsk oblasts, or provinces, in Ukraine