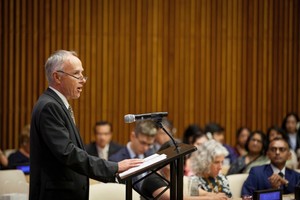 David Cortright presents at the UN. Photo: Permanent Mission of India to the United Nations

This is an excerpt from remarks delivered by David Cortright, Kroc Institute director of policy studies and the Peace Accords Matrix, at the International Day of Nonviolence event hosted by the Permanent Mission of India to the United Nations (UN) at the UN Headquarters in New York on October 2, 2019. The remarks honored the 150th birthday of Mahatma Gandhi on the same day.

I am deeply honored to be asked to say a few words here today about Gandhi’s message and its relevance to today’s global climate crisis.

Gandhi became the “greatest person in the world” (as many called him) not through power and wealth, but through selflessness and humble service to others.

All of his possessions at the end of his life fit into a small box. He lived simply and rejected materialism. He moved from a large home to live communally in an ashram.

In his emphasis on simplicity and non-possession, Gandhi was revealing a profound truth about the roots of our current crisis, and he was pointing toward the pathway to a more sustainable future.

In Hind Swaraj he described the quest for material goods and the endless multiplication of wants as “Satanic.” If India were to follow the industrialism and economic imperialism of the West, he warned, it would “strip the world bare like locusts.”

Gandhi’s critique of excessive materialism calls into question our constant striving and demand for more goods. Are we consuming too much? Have our wants out-stripped our needs?

His critique also calls into question our model of economics. Our modern economic system is predicated upon endless growth, but there are unavoidable limits to the earth’s biological carrying capacity. We cannot keep dumping ever greater amounts of waste products into the atmosphere and the oceans.

The current global effort to stem carbon emissions focuses on the supply side. Produce more efficiently with less energy. Use renewal materials and resources. All of this is good, but it is insufficient. We must also look at the demand side and explore ways to produce less, to consume less.

The global supply chains of today stretch from the high-consuming West, to the high-producing East, especially India and China. While emission levels have moderated slightly in the West, they are rising in the East, to satisfy the excess wants and manufacture the superfluous goods demanded in the West.

Curbing our demand for products does not mean that we abandon the struggle against poverty. We must continue and accelerate the work of fulfilling the Sustainable Development Goals, as discussed here at the UN this past week, but surely we can find a way to continue lifting people out of poverty without further ruining the environment or undermining the life support systems that are necessary to sustain human dignity into the future.

Gandhi devoted himself to serving the poor.

In his famous Talisman, he said we should ask ourselves how our actions will affect the poorest and the weakest. We should act in ways that will help to liberate the hungry and lift up the least of these.

We know that the harmful effects of pollution and climate chaos fall disproportionately upon the poor and powerless. The rich and mighty can move to higher ground or cooler climes, but the impoverished do not have that option.

I hope you will allow me to quote from Pope Francis. You would expect nothing less from a professor at a great Catholic university.

The Holy Father links the marginalization of the poor to the exploitation of the environment. In his historic encyclical Laudato Si he calls us to be in solidarity with the miserando, the lowly who are “mired in desperate and degrading poverty, with no way out, while others … [are] vainly showing off their supposed superiority and leaving behind so much waste that, if it were the case everywhere, would destroy the planet.”

Gandhi thought of excess consumption as thievery. If we take more than is necessary for own needs, he believed, we take it from others.

Gandhi’s most important contribution to the world, I believe, is his philosophy and method of nonviolence. He demonstrated the power of disciplined peaceful disobedience, how mass noncooperation with injustice can change the course of history.

His philosophy of nonviolence is based on the principle of ahimsa, non-harm, the refusal to hurt another person, and also the responsibility to stand up for those who are harmed or threatened. He said that love and nonviolence are the pathway to spiritual fulfillment and divine truth, and he showed that they can also be means of overcoming oppression and injustice.

He rejected violence because it is based on domination and coercion. Peace, on the other hand, is rooted in cooperation and freedom.

As we strive to live peacefully with our fellow human beings, we must also be at peace with the earth. With all of our energy and strength, we must take up the responsibility to protect and preserve this precious, vulnerable envelope of air, water and soil that sustains all life and that is increasingly in peril due to our own actions.

As we reflect today upon Gandhi’s teachings on nonviolence, we would be remiss, I believe, if we did not mention the current situation in Kashmir.

Gandhi played a role in Kashmir in 1947, traveling there to meet with the Maharaja Hari Singh. When discontent and violence ensued, he said, “If anyone can save Kashmir, it is only the Muslims, the Kashmiri Pandits, the Rajputs and the Sikhs who can do so.”

Today there is renewed discontent, and a risk of violence, but this must be avoided, as Gandhi would insist. The only path to a just settlement is through nonviolent democratic means.

Long live the spirit and message of Mahatma Gandhi!