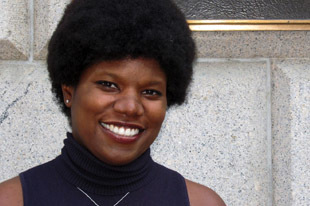 Tona Boyd is chief counsel to Senator Cory A. Booker on the Senate Judiciary Committee.

Prior to serving in this role, she was an attorney in the Civil Rights Division of the U.S. Department of Justice in Washington, D.C.

"I started my career doing exactly what I had hoped to do all along," says Tona, who graduated in 2009 from Harvard Law School, where she was honored with the Dean's Community Leadership Award.

"[Working for the Civil Rights Divison] allowed me to work for justice, to make sure those who are marginalized have the same opportunities everyone else has," Tona said. "That's how you build a healthy peace."

Before law school, Tona's interest in human and civil rights led her to an internship in the human rights office at the Carter Center. As a law student, she worked at a legal-aid organization in Cape Town, South Africa, and served as an executive editor for the Harvard Civil Liberties Law Review.