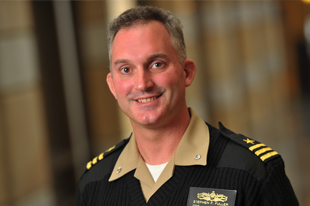 Stephen Fuller '92 (government/peace studies) is the commanding officer of the USS Nicholas, the ship that captured the Somali pirates in spring 2010.

He previously was commanding officer of another storied frigate, the USS Hawes, which has been involved in international rescues, counter drug operations, anti-pirate work, and diplomatic missions around the world.

"Probably about 75 percent of the Navy's work is diplomatic in nature," Steve says, citing community service, medical care, protection of civil society, and rebuilding after earthquakes, tsunamis, and wars. "Our core competencies are in strategic defense, but other missions related to peacebuilding play an essential role, and they always have."

Steve grew up on the seacoast of New Hampshire, where he learned to love the ocean and says his heroes included Martin Luther King, Jr. and Mahatma Gandhi. He attended Notre Dame on an ROTC scholarship, majoring in government and peace studies. As a Navy midshipman and student studying peace at Notre Dame, he cultivated his skills as a bridge between the worlds of the military and peacebuilding.