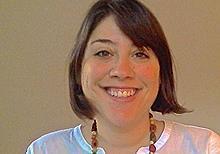 Stephanie (science and peace studies) also holds a law degree from Northeastern University School of Law. In her position, she engages with state and local policymakers, forms partnerships with industry leaders and community coalitions, and coordinates research on worker health, safety, and wages.

"Ultimately, we aim to build worker power," Stephanie says, "Construction is one of the largest industries in Texas, yet the state does not require worker's compensation and most workers are earning poverty-level wages."

Texas is the most dangerous U.S. state to work in construction, she adds, with more construction workers dying in Texas, and at a higher rate, than any other state.

To combat these injustices, Stephanie helps workers prepare to testify at legislative hearings, coordinates research efforts with universities and think tanks, and meets with worker-members to ensure the group's policy goals are meeting their needs.

"I enjoy being part of an organization that is doing both grassroots and 'top-down' work," Stephanie says. "I get to be a bridge between both worlds."

"My peace studies courses introduced me to the importance of human dignity and the common good, and inspired me to live my life by those values," Stephanie says.

"Courses like David Cortright's Nonviolent Social Change taught me valuable skills such as running strategic campaigns, which I now use every day."

Before joining the Workers Defense Project, Stephanie was legal director at Interfaith Worker Justice, a nonprofit organization that educates and mobilizes people of all religious faiths on issues important to working people.